Last week recession questions were more common than in the past during our many conversations with clients. The likely performance of the energy sector during a slowdown is what they’re asking.

Recession risks are growing in the minds of many. In one recent survey, a third of economists are forecasting a recession within two years. Some may joke that a third of economists are always forecasting a recession – but Goldman Sachs puts the odds at about 35% and JPMorgan has increased provision for loan losses because their internal modeling showed heightened risk.

Recessions aren’t good for stocks, and no sector is immune. If you’re worried about a recession, you should reduce your equity holdings. But the market invariably bounces back – most spectacularly following Covid. The bigger risk for investors is inflation, and it may not always come with robust economic growth as we have now.

Data on Friday showed 1Q22 Eurozone growth of only 0.2%, down from 0.3% the prior quarter. France was flat and Italy contracted. Year-on-year inflation is running at 7.5%. Stagflation, which is being increasingly heard from European analysts, is especially hard for central banks to manage because the correct monetary stance is unclear.

The US is in better shape. Last week’s GDP report was negative partly due to a bigger trade deficit, evidence of robust demand. On Friday personal consumption expenditures were solid and the quarterly Employment Cost Index increased by 1.4%, up from 1.1% in December. In America, everyone who wants a job has one. Gasoline prices are high, but Democrats can promote that as a reason to accelerate the energy transition while Republicans can feel good about the boost this provides to domestic production and energy independence. Maybe I’m overly glass half full, but spending $100 to fill up feels pretty good right now. 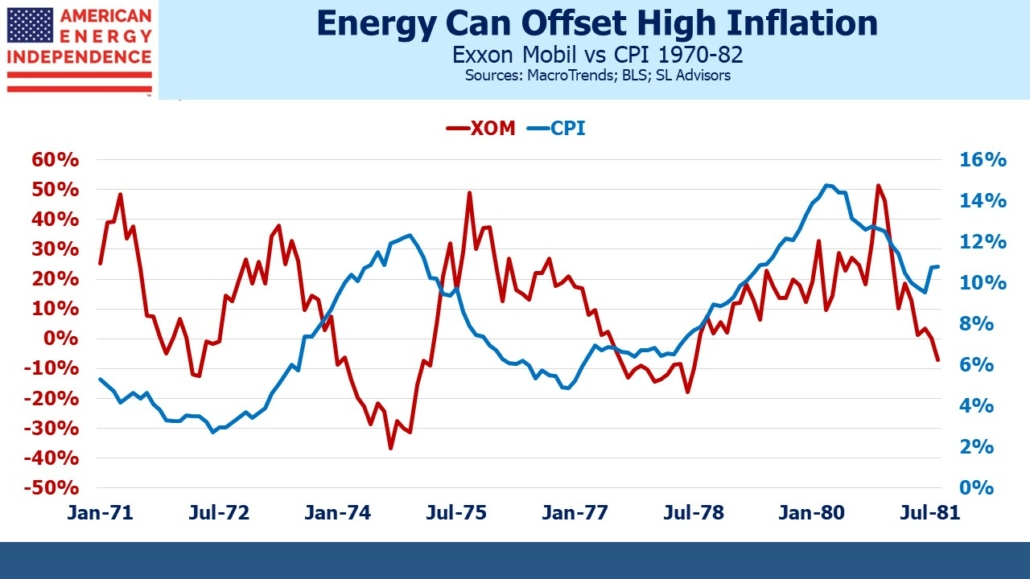 The Fed is forecasting a utopian combination of falling inflation, moderate rate hikes and continued strong employment that is so hopeful it’s certain to be wrong.

We looked back at the performance of Exxon Mobil (XOM) versus CPI going back to 1970 to see what type of inflation protection the energy sector might offer. It turns out that one year returns on XOM and year-on-year CPI aren’t correlated during times of low inflation, but the relationship is stronger when prices are rising faster. The chart plots both sets of one year returns from 1970 to 1982, the last time we had inflation as high as it is today. 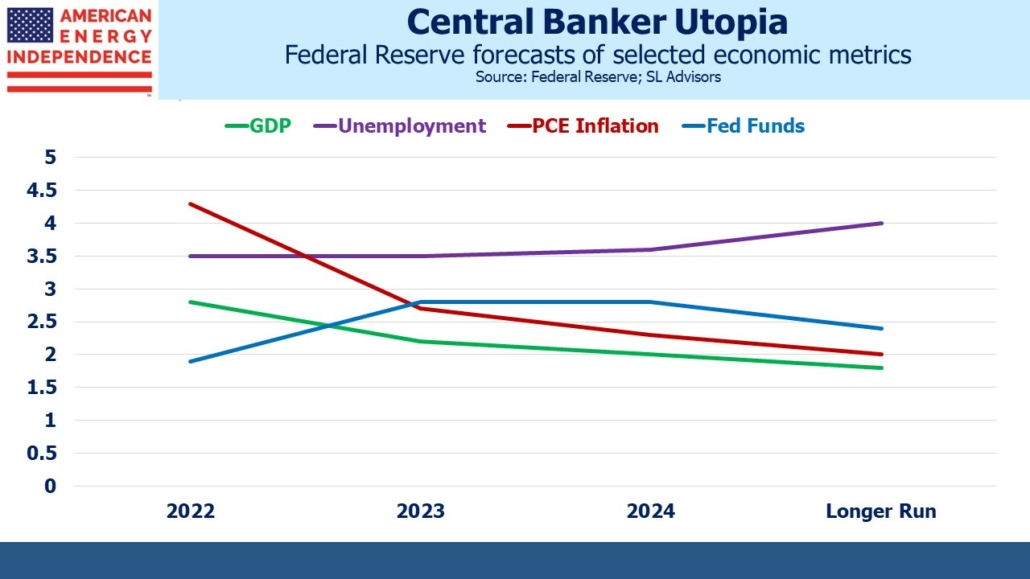 High returns on XOM anticipate higher CPI, although the time lag does seem to vary. When inflation is running above 6%, one year XOM returns have a 0.25 positive correlation with one year lagged CPI. In other words, when investors anticipate rising inflation, they invest in the energy sector ahead of time. The strong recent returns on energy stocks have similarly correlated well with higher inflation.

Which element of the FOMC’s utopian forecast is most likely to be wrong? It doesn’t even have the Fed Funds rate reaching inflation until the end of next year. A real policy rate that’s negative is not how monetary policy has in the past curbed inflation. It’s also unclear why wage inflation, currently 4.7% and rising year-on-year, will moderate if the unemployment rate remains at 3.5% as they expect.

The path to a recession runs through stubbornly high inflation. The last two downturns, 2020 Covid and 2008 Great Financial Crisis, were unusual. Most recessions occur because the Fed waits too long to raise rates and then goes too far. If those recession fears turn out to be prescient, it will most likely be because the Fed’s rate forecast was too benign. That would mean their inflation forecast was also too optimistic. This would in turn suggest that energy stocks would continue to play an important role in protecting against inflation.

In brief – if you fear a recession, you could do worse than buy energy stocks because it’ll be higher than expected inflation and interest rates that causes one.

On a separate note, Tellurian (TELL) CEO Charif Souki has many talents but deferred reward for good execution is not one of them. We’ve long preferred NextDecade (NEXT) over TELL – both are planning new export terminals for Liquefied Natural Gas (LNG), but Souki’s risk tolerance and inflated view of his own compensation have never sat well with us. When energy stocks cratered two years ago, Souki was forced to sell TELL stock he owned on margin. No matter – the board soon granted him more.

In a proxy quietly filed on Thursday (see here pg 69 paragraph c), TELL granted Souki over $17 million in stock awards. His payday ought to wait until TELL is actually loading LNG onto tankers from its not yet built terminal. TELL’s prospects look very good, but if the additional equity capital they assuredly need comes on terms that are ruinously dilutive for today’s common equity holders, their CEO will nonetheless have done very well. Souki is a risk factor for investors in TELL to consider.

The post Why Recession Fears Can Help Energy Stocks appeared first on SL-Advisors. Four Questions With | Simon Lack on the Oil Markets Financial advisors probably feel that they’re more than earning their pay recently. Market volatility is high, which means clients want to know what’s going on. Advisors have in the past confided to me that one of their most important roles is to persuade clients from selling impetuously. Their original asset allocation was made after much careful consideration and ought not to be tinkered with just because the market’s moved a bit. Friday’s rally helped, but the S&P500 is still -15% for the year. If you have energy exposure, you’ll have done better. END_OF_DOCUMENT_TOKEN_TO_BE_REPLACED

Earnings for pipeline companies are generally devoid of excitement unless steady growth gets you animated, such is the stability of most business models. But 1Q22 earnings were full of positive surprises. Cheniere (CEI) blew away expectations with 1Q22 EBITDA 65% ahead of consensus. Most of their Liquefied Natural Gas (LNG) contracts are based on a fixed charge for liquefaction, but in some cases they’re able to market the LNG themselves. END_OF_DOCUMENT_TOKEN_TO_BE_REPLACED

Last week recession questions were more common than in the past during our many conversations with clients. The likely performance of the energy sector during a slowdown is what they’re asking. END_OF_DOCUMENT_TOKEN_TO_BE_REPLACED

Before there were Saudis – there were Texans. In 1948, U.S. oil production and reserves accounted for 64 percent and 34 percent of the global total. Texas was the largest U.S. producer by far, accounting for 45 percent of total U.S. production. END_OF_DOCUMENT_TOKEN_TO_BE_REPLACED

Earlier this month there was a fascinating exchange on Bloomberg TV between former NY Fed president Bill Dudley and journalist Jonathan Ferro. Dudley has been vocal in criticizing the slow rate at which his former FOMC colleagues have been normalizing monetary policy. END_OF_DOCUMENT_TOKEN_TO_BE_REPLACED