Interest rate markets became a lot more interesting this year. Uncertainty around inflation and the Fed’s likely response are creating undulations in the yield curve whose precise forecasts are sometimes a trading opportunity. 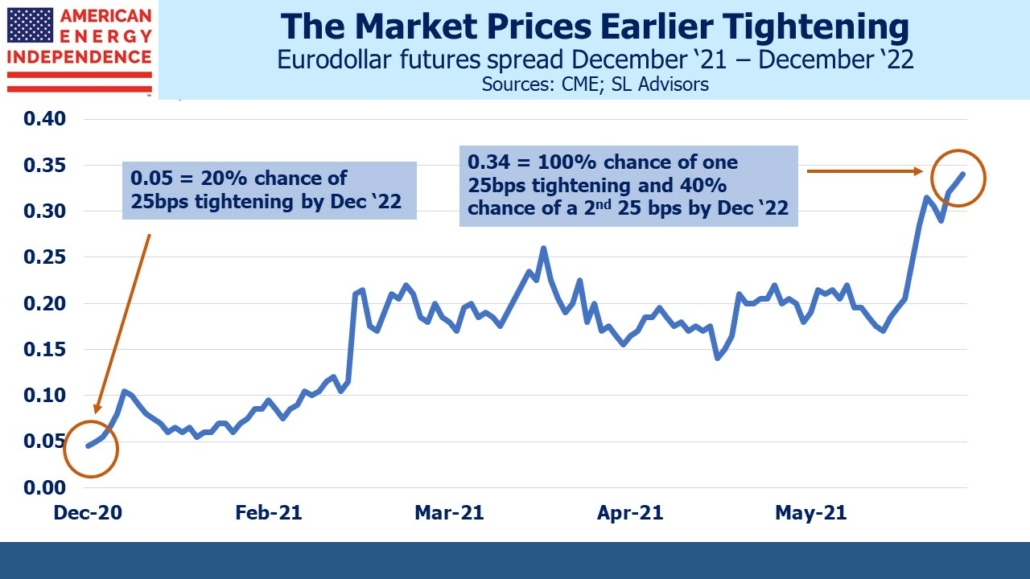 For example, late last year the spread between the December ‘21 and December ‘22 eurodollar futures contracts was around 5bps. Since the Fed typically moves its policy rate in 25bp increments, this projected a one in five probability of one tightening in 2022. This turned out to be too low. A rebounding economy combined with profligate fiscal stimulus has led to upward revisions to growth and inflation this year.

The FOMC’s Summary of Economic Projections (SEP) showed that FOMC members had moved brought forward their estimated timing of higher rates. By early June the spread was at 20, showing an 80% of a 2022 year-end tightening. Six months ago, taking the one in five odds by buying the spread (long December ‘21 and short December ‘22) was a good bet.

A week ago, following the June FOMC meeting, St. Louis Fed president James Bullard revealed that he is forecasting a 2022 tightening. He is one of seven (out of 18) FOMC members with that view, two of whom expect two tightenings. So we know where Bullard’s blue dot sits. Our eurodollar spread moved further, and now sits around 34 where it is priced for at least one tightening by the end of next year and around a 40% chance of a second.

Imagine sitting down with FOMC members while they tell you whether eurodollar futures are correctly priced or not. Were James Bullard to visit SL Advisors’ GHQ and enter into such a conversation, he would likely endorse the market’s pricing. Getting here was the Bullard trade. He favors a faster pace of tightening than some other FOMC members. 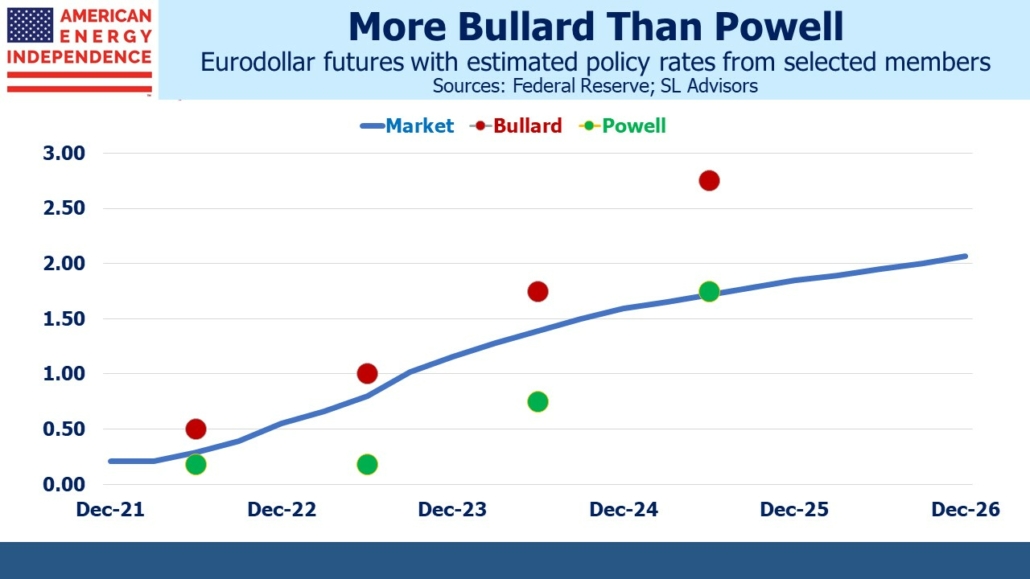 The slow, or dovish camp is led by Fed chair Jay Powell. 11 of the 18 FOMC members expect no tightening next year. If Powell accepts this invitation to visit SL Advisors and discuss eurodollar futures, he would say that the market is wrong. He goes to great lengths to downplay the significance of the blue dots in the SEP.

Powell regularly reminds us that the unemployment rate in February 2020 just before Covid was 3.5%, so today’s 5.8% suggests we remain far from full employment. We’re still over 7 million jobs short of where we were, and Powell wants to give those people every opportunity to return to the labor force. He expects inflation to moderate from its temporarily high level and sees little likelihood of the Fed having to hike rates next year. The market is currently skeptical of this view.

The Bullard view is currently in the ascendancy. He favors a faster path to higher rates, which by moving earlier in the economic cycle suggests less need for tightening later on. Eurodollar futures more closely reflect this outcome. Fed chair Powell may be among the majority of FOMC members, but financial markets disagree. What always makes such contrasts especially fascinating is that futures prices are telling the FOMC they disagree with their forecast. It would be bold of a bond manager to tell the Fed chair’s he’s dead wrong, but the market’s collective estimate is doing just that.

By 2023 most FOMC members expect higher rates, but there are still five who forecast no hike and two looking for just one. Powell is likely in one of these two groups – it therefore must be galling to have watched the December 2023 eurodollar futures yield climb almost 30bps from where it was prior to their meeting. At 1.15% it’s pricing in 3-4 tightenings, whereas Powell is likely expecting only one. He must think December ‘23 futures are cheap.

Powell might be right, and certainly has more influence over the outcome than most others. His term as Fed chair ends in February, but if he’s not reappointed an equally dovish replacement is likely. The bond market is no longer as powerful as when Clinton’s campaign manager Jim Carville said he’d like to be reincarnated, “…as the bond market. You can intimidate everybody.” 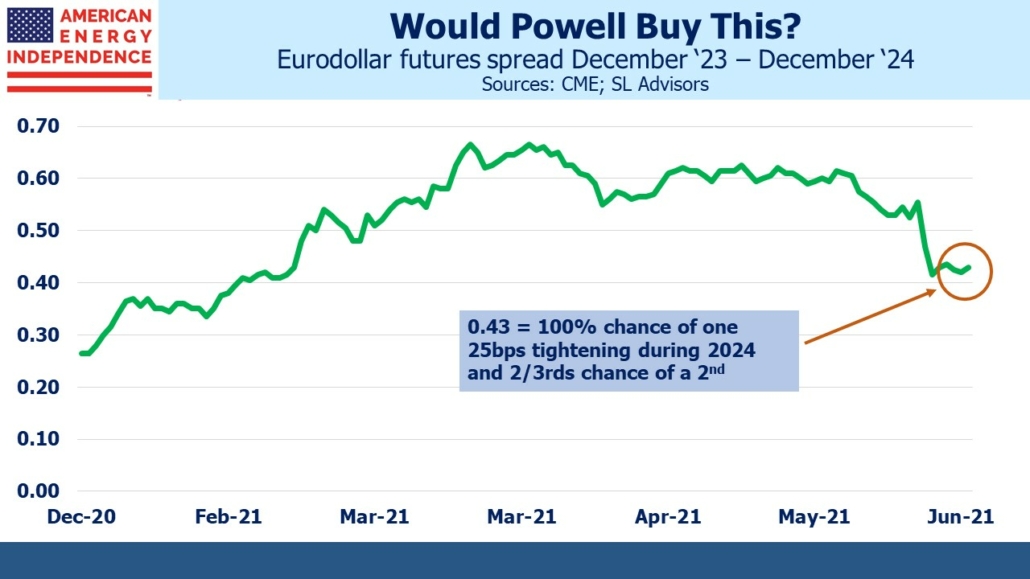 What this means is that while we’ve had the Bullard trade, the Powell trade is possible. This is where markets price in a more delayed tightening, meaning more later on. Looking farther out on the curve, the spread between the December ‘23 and December ‘24 eurodollar futures in forecasting less than two tightenings in 2024. The FOMC has a longer term, equilibrium rate of 2.5%, although eurodollar futures don’t forecast we’ll reach this level within even five years.

Markets expect the Fed to start tightening by 2023. It seems implausible that, once in motion, the Fed will move less than at least once per year. The Dec ‘23/Dec ‘24 spread has narrowed almost 25bps from its widest levels, mostly because the Dec ‘23 has moved farther from the FOMC. The Powell trade would be to buy this contract and sell Dec ‘24, betting on delayed tightening but ultimately two or more annually. At 43, it’s not yet a compelling opportunity but is worth watching in case it narrows a little more.

Eurodollar futures currently offer a rich source of information, and the occasional trading opportunity, by comparing market forecasts with those of the FOMC.

The post The Fed, Thinking Fast Or Slow appeared first on SL-Advisors. What a difference a year can make. In 2020, natural gas prices declined to multi-year lows. According to BP's 2021 Statistical Review of World Energy, prices at U.S. Henry Hub averaged $1.99/mmBTU – the lowest since 1995. Asian LNG prices, meanwhile, declined to their lowest level on record ever. END_OF_DOCUMENT_TOKEN_TO_BE_REPLACED

For years environmental extremists have campaigned with increasing success for less investment in fossil fuels. The logic has been that as CO2-emitting sources of energy become harder to access and more expensive, the world would increasingly turn to renewables. END_OF_DOCUMENT_TOKEN_TO_BE_REPLACED

Our series on critical mineral commodities is focused on the future. We are looking at long-term supply and demand fundamentals, cutting edge technological uses, and potentially brittle supply chains to serve food for thought for savvy macro investors. Of course, we are also pulling back the curtain, if ever so slightly, on some of our own internal process for considering these issues. END_OF_DOCUMENT_TOKEN_TO_BE_REPLACED

Gold. What’s wrong with it? From spiking inflation, falling real interest rates, and massive money printing, it seems logical that gold, a touted inflation hedge, should be rising. Yet, so far this year, gold has done little. END_OF_DOCUMENT_TOKEN_TO_BE_REPLACED

Nickel and the various compounds derived from it are essential to modern manufacturing practices. Among nickel’s extensive virtues are its high melting point, its natural resistance to corruption, and the ease with which it can be combined with other elements to perform alloys. END_OF_DOCUMENT_TOKEN_TO_BE_REPLACED