Earnings season for the pipeline sector kicks off Wednesday 20th with Kinder Morgan. Crude oil prices have slid over the past several weeks, reflecting increased fears of recession and China’s ongoing efforts to eliminate Covid through regional lockdowns. Sharp moves in oil affect energy sentiment and the consequent drop in midstream energy infrastructure reflects these global macro concerns.  Fundamentals continue to look very good to us.

Europe’s sharp pivot away from Russian energy is a permanent shift, with long term benefits for the US natural gas business. The drop in crude will provide some relief at the gas pump for households. Middle income households (average income around $66K) are spending 12.3% of their income on gasoline and home energy bills, up from 9.5% in 2020. The recent drop in prices will support demand, which is good for pipeline operators.

Political developments have also been positive. The EU recently classified natural gas and nuclear power as “green”, which will enable increased use and introduce some sensible pragmatism to European energy policy. In the US, Democratic Senator Joe Manchin did us all a favor by declining to support the Democrat party’s liberal agenda on climate change at least until we see some moderation on inflation. Policies that aggressively favor solar and wind result in more expensive energy. Empirical evidence is widespread – California and Germany being two examples.

It’s increasingly clear that the science around climate change has been far more accurate in forecasting increased levels of CO2 than in predicting the resulting impact on climate. Both Vaclav Smil in his latest book How the World Really Works and Alex Epstein in Fossil Future point out numerous predictions of climate catastrophe that have been dead wrong. Smil notes four decades of shoreline change in all 101 islands in the Pacific atoll nation of Tuvalu show that the land area has increased by 3%. The Maldives, in the Indian Ocean and most of which is four feet or less above sea level, apparently faces an existential threat from climate change and nonetheless added a new airport to accommodate more tourists. 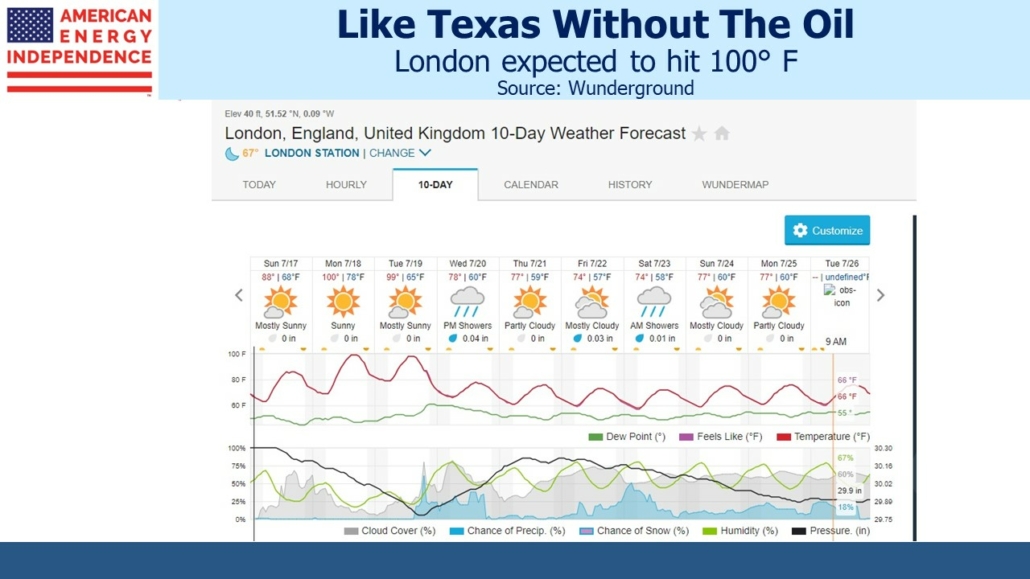 Europe is enduring a heatwave. Parts of southern England are expected to reach 100 degrees this week. The UK Met Office, which issues weather forecasts, has never before issued one so high. Having grown up in the UK I can attest that a warm summer’s day peaking around 80 degrees is thoroughly agreeable. When combined with an evening beer or three in a pub garden basking in the warm glow of a 930pm sunset, life is positively sublime. However, with residential air conditioning unknown, the country isn’t prepared for Texan weather.

Climate change will be blamed. We’ll be warned to expect more such extreme weather events. But the reality is that, as miserable as the heatwave will be, if such events occur more frequently the British will simply start installing AC. Following the policy prescriptions of climate extremists would be economically ruinous on a scale completely disproportionate to the costs of adaptation. The public has largely concluded as much, which is why global demand for fossil fuels has stayed robust. The same is true of asset markets, where no discernible “climate change discount” exists, a point memorably offered by HSBC’s former head of responsible investing, Stuart Kirk, in a wonderfully irresponsible presentation that became his swan song.

In midstream energy infrastructure, positive fundamentals are leading sell-side firms to upgrade their earnings forecasts. JPMorgan expects Kinder Morgan to revise full year guidance higher based on what they anticipate will be solid 2Q22 results. Targa Resources should have strong gathering and processing results. Williams recently provided optimistic feedback so their forecast 2Q22 EBITDA was revised modestly higher. JPMorgan has raised their 2Q22 EBITDA forecast for Enterprise Products Partners by 266MM (13%) across various segments. Energy Transfer is expected to deliver strong results from their midstream segment, with crude oil a headwind due to bad weather in the Bakken.  There should be updates on eventually getting back to a $1.22 distribution, easily covered in our opinion with distributable cash flow next year providing comfortable 1.8X coverage.

If these stocks rally it may be a case of “selling the news”. Long-time readers know better than to rely on us for short term market timing. The point is, for these companies and others, business is good.

If pipeline stocks were marketed by Walmart, their promotional ads would remind that you can “Buy midstream at pre-Ukraine war prices.” It sounds Cramer-esque.

With earnings season upon us, that might be the most accurate sales pitch.

The post Pipeline Earnings Should Be Good appeared first on SL-Advisors.