Voters have a history of blaming the president for high gasoline prices, even if the White House has limited power to change them. When OPEC tripled oil prices following the Iranian revolution in 1979 it was one blow too many for Jimmy Carter, who was swept aside by Reagan in 1980. The Arab world’s opposition to US foreign policy in the Middle East was one of the causes of high crude.

Although Joe Biden wasn’t at the OPEC meeting that just collapsed over the UAE’s insistence on an increased production quota, the continued bull market in oil which got a further boost can be partly traced back to his policies. Goaded by the progressive wing of the Democrat party, the Administration has a hostile attitude towards new oil and gas production.

Growing political pressure on energy companies to cut back oil and gas production is having an impact. Large publicly traded companies are especially vulnerable to such pressure. Exxon Mobil and Chevron both recently had to modify their spending plans in response to shareholder pressure, while Royal Dutch Shell was ordered to do so by a court (see Profiting From The Efforts Of Climate Extremists).

One consequence is that OPEC’s influence over oil prices is growing, as non-OPEC producers have less spare capacity. Demand is currently running at 97 Million Barrels per Day (MMB/D) and looks set to reach 100 MMB/D by year’s end. There’s no reason to expect demand to stop increasing at that point, as rising living standards in emerging Asia are likely to push it above pre-Covid levels.

The US energy industry’s newfound financial discipline is also helping. Domestic production is not rising nearly as much as in past cycles. This is all great news for energy investors. Having endured excessive capex with low prices, the pendulum is now swinging back the other way. Morgan Stanley expects the group of independent US shale producers under research coverage to boost Free Cash Flow (FCF) by a third over the next year, where they’ll have a FCF yield of 15%. We expect North American pipeline companies to generate $49BN in FCF this year, up 27%, and $56BN in 2022. 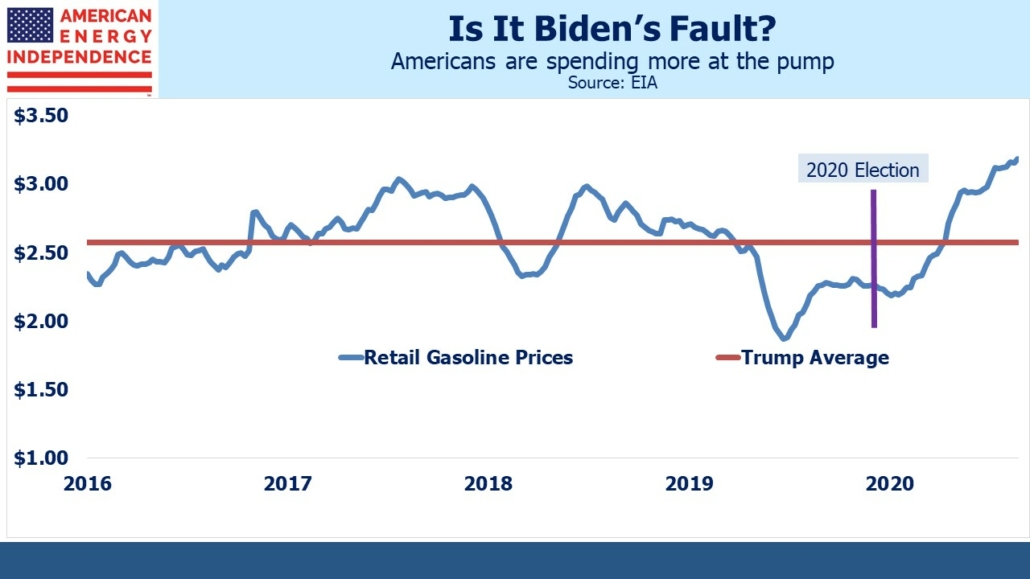 Environmental extremists are very happy with rising oil prices. There will be no energy transition unless renewables are competitive, and this helps. They tend to be more city-dwellers than rural, so gasoline prices don’t have much impact.

Energy investors are also happy, as the unlikely alignment of interests with the liberals has led to a mutually desired outcome. But what about the rest of America? Gasoline prices are now higher than at any time during the Trump presidency. This is yet another incongruity with continued fiscal and monetary support for the economy which clearly no longer needs it. Biden can quietly turn to the disillusioned progressives who think he’s abandoned them and claim credit for the high oil prices they want.

So far the energy transition has had limited impact on consumers. Apart from power outages in states where renewables have risen to an unwieldy share of electricity generation (see California and Texas), disruption has been minimal. Rising gasoline prices will eventually test society’s willingness to pay more for energy. We should pay more. The energy transition is expensive. If lowering CO2 emissions was easy we would have already done it. If it’s a worthwhile endeavor, it’s worth paying for.

The problem is that the energy transition hasn’t been marketed as such. Candidate Biden promised us green employment opportunities that would be well-paying union jobs. It’s all been disingenuously promoted as an exciting opportunity. Instead it’s an eternal slog to avoid carpeting the landscape with intermittent solar panels and windmills until pragmatism dictates the adoption of new technologies: carbon capture and sequestration to allow increased use of natural gas (see Carbon Capture Gains Momentum); blending of hydrogen into the natural gas supply (see Europe’s Nascent Hydrogen Industry); and perhaps one day we’ll revisit nuclear, if society truly wants to solve the problem.

Although Biden gasoline prices are higher than at any time under Trump, they reached $4 a gallon in 2014 under Obama. It wasn’t much of a political issue back then, because the president hadn’t done much to cause it. That was also the peak in the energy cycle, since the Shale Revolution’s supply shock followed and prices duly fell.

This suggests that the pain threshold for rising gasoline prices is above where they are today, which is good news for energy investors. It means environmental extremists can continue shifting oil supply to foreign governments and privately held firms, continuing the publicly traded industry’s virtuous cycle of reduced capex and growing FCF. Biden’s vulnerable on gas prices because his policies are intended to push them higher, but we’re not there yet. Pipeline stocks still have plenty of upside.

The post Is Biden Vulnerable At The Gas Pump? appeared first on SL-Advisors. This week the FOMC meets on Tuesday and Wednesday. Most recently released minutes suggest that the gradual cessation of the $120BN in monthly bond buying ($80BN in US treasuries and $40BN in mortgages) is getting closer. END_OF_DOCUMENT_TOKEN_TO_BE_REPLACED

Bob Rubin was US Treasury Secretary from 1995-99 under Bill Clinton. Early in his tenure, the US$ came under severe downward pressure. Market pundits kept calling for the Treasury to provide US$ support, to stem the slide. END_OF_DOCUMENT_TOKEN_TO_BE_REPLACED

Last week’s big story was the sharp drop in bond yields. Ten-year treasuries dropped below 1.3% on Thursday, down 0.30% on the month. Big moves in bonds usually have a visible catalyst, but there was no obvious driver of last week’s move. END_OF_DOCUMENT_TOKEN_TO_BE_REPLACED

Voters have a history of blaming the president for high gasoline prices, even if the White House has limited power to change them. When OPEC tripled oil prices following the Iranian revolution in 1979 it was one blow too many for Jimmy Carter, who was swept aside by Reagan in 1980. The Arab world’s opposition to US foreign policy in the Middle East was one of the causes of high crude. END_OF_DOCUMENT_TOKEN_TO_BE_REPLACED

Interest rate markets became a lot more interesting this year. Uncertainty around inflation and the Fed’s likely response are creating undulations in the yield curve whose precise forecasts are sometimes a trading opportunity. END_OF_DOCUMENT_TOKEN_TO_BE_REPLACED