For a graphic picture of how the restaurant business has shut down, it’s hard to beat the OpenTable chart below. For several weeks, U.S. dinner reservations on their system have run at 100% below normal (i.e. there were none).

What portion of this sector survives depends on the pace at which we re-open, combined with the public’s perception of risk. 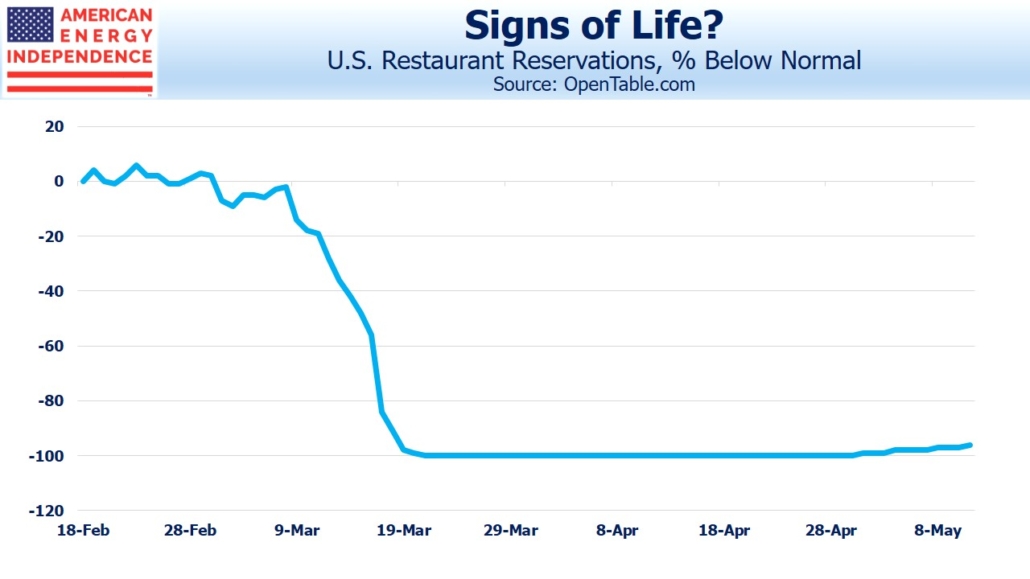 When it comes to risk assessment, human behavior is not always driven by numbers. Flying is an example – although aviation deaths are extremely rare, terrifying media coverage overwhelms the data, which is that around 150,000 commercial flights are completed safely every day worldwide (pre-Coronavirus).

Some find the imagery overpowers the logic, and as a result they drive because they feel safer, even though 38,000 Americans die annually on the roads.

That type of risk aversion does relatively little harm to society – the individual who chooses to drive 1,000 miles bears most of the additional risk from that decision. 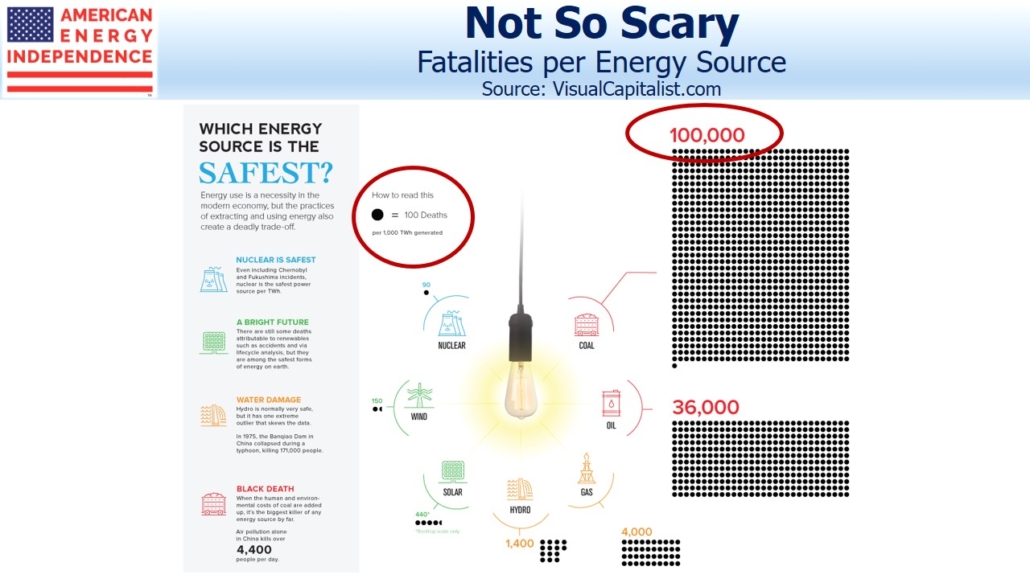 Fear of nuclear energy has caused much more harm, by impeding our use of a zero-carbon source of electricity, thereby increasing use of coal. HBO’s Chernobyl series last year could have done great harm to the future of America’s nuclear power business if its prospects weren’t already so bleak. In the popular imagination, the image of a peacetime mushroom cloud creates visceral opposition. Per terrawatt hour of electricity produced, nuclear kills 1/1,000th as many people as coal. But the coal deaths from pollution are steady and unrelenting, while events leading to deaths from nuclear are spectacular.

There are still no recorded deaths from the 2011 nuclear accident at Fukushima, Japan, although 2,259 deaths are blamed on the subsequent evacuation. Three Mile Island also caused no deaths. Public policy decisions on Coronavirus seek to find a balance between minimizing loss of life from the virus itself, and the less measurable collateral damage (economic and health) from shutting down much of life as we knew it. Although there are instances of lockdown protests, opinion polls show widespread support.

Dinner reservations provide a view of how one industry is being impacted. Some regions are slowly reopening, and anecdotal evidence so far suggests that, even with the mandated reduced capacity to maintain social distancing, there are plenty of open tables.

Although policymakers will determine when businesses can re-open, the public’s assessment of risk may lag. Society’s vulnerable members are generally well defined as the older and those with other serious health issues (see footnote on chart below). Statistics on road deaths and aversion to nuclear power show both extremes of risk tolerance. We’ll soon find out where Coronavirus risk sits on this spectrum.

Chart note: Due to the time lag in filing death certificates, the CDC currently counts around 37K COVID-19 deaths, roughly half the generally accepted figure.

The post How Risky is Dining Out? appeared first on SL-Advisors. Retail Sales Bounce, But Consumers Are Tapped Out Brands Expert Comments on the Sweet Spot in the Economic Data What Happens After the Crash, V-Shaped Recovery? The Stagnation Phase The Bull is Back! Markets Charge as the Economy Lags