The cold winter currently being endured in north-east Asia isn’t just a boon for those hoping the planet isn’t burning up. It is setting a fire under local prices for Liquified Natural Gas (LNG). Because of the relatively high cost of moving LNG by tanker, regional price differences can be far wider than for crude oil, where transportation costs are a much smaller portion of the overall shipment.

February LNG prices for the JKM benchmark used by Japan and South Korea eclipsed $17 per thousand cubic feet (MCF) last week, with reports of at least one individual cargo trading at above $33. Wholesale electricity prices touched 100¥ per KWh. By contrast, U.S. February natural gas is at $2.70 per MCF. 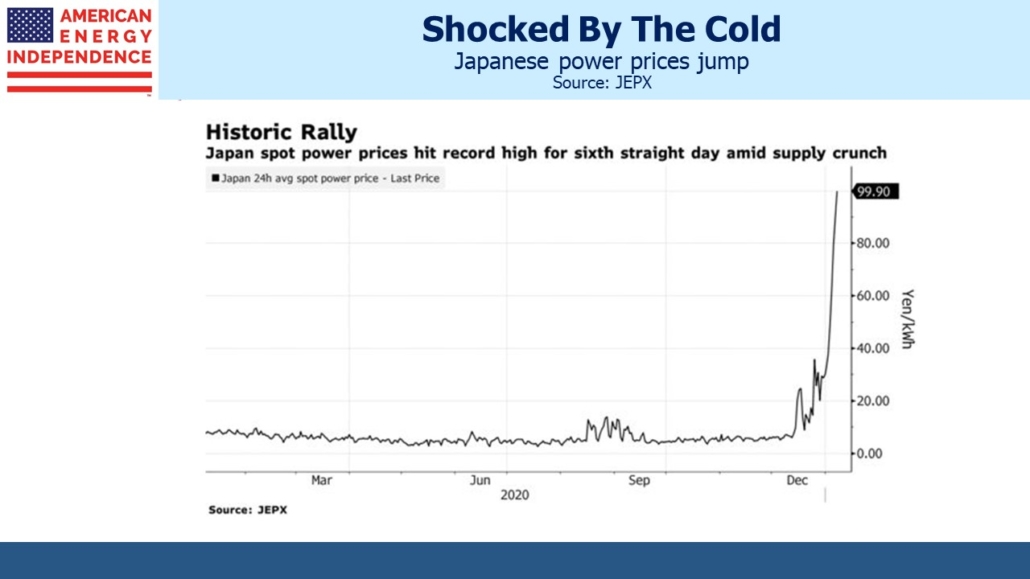 $3-5 per MCF is generally the cost to ship LNG from the U.S. Gulf coast to Asia. With regional prices until recently around $7-9, the differential was already boosting LNG exports from the U.S. and elsewhere. 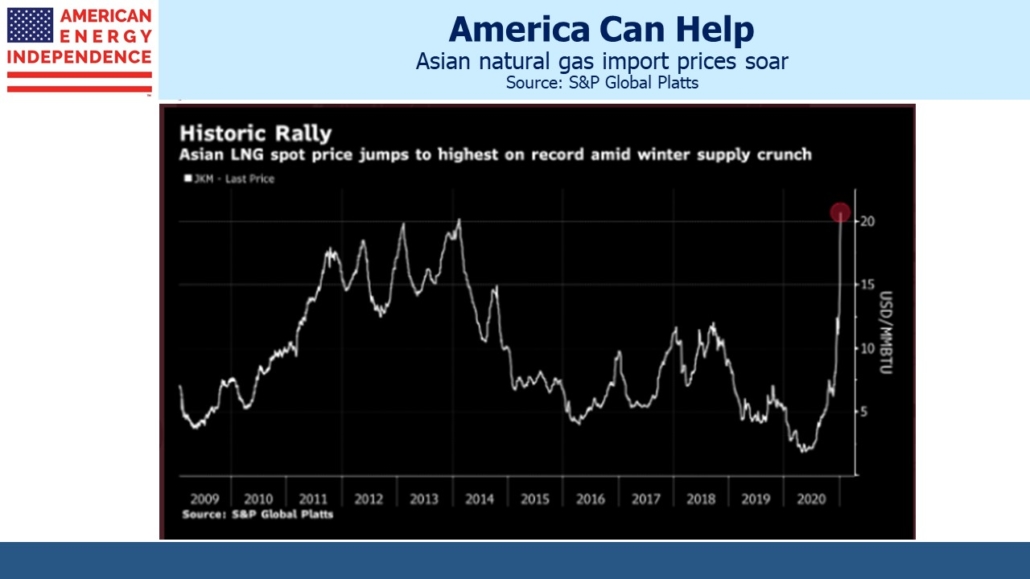 The low temperature in Beijing on Thursday was -3F, not seen since 1967. China’s electricity demand is likely to set a new high this winter, with manufacturing rebounding strongly from the Covid slump. China stepped up its LNG imports last year, seeking to moderate its reliance on coal, where it consumes half the world’s output. 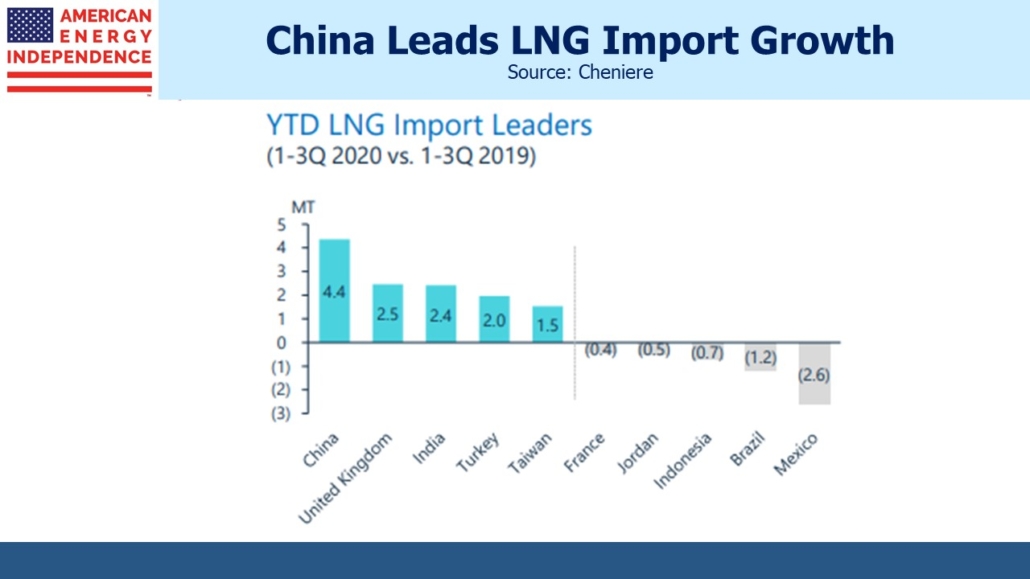 The EIA estimates that 58% of China’s total energy consumption comes from coal, with natural gas just 8%. Cheniere, the biggest operator of LNG export facilities in the U.S., estimates that China will double its natural gas pipeline network, to 163,000km, by 2025. South Korea, Taiwan, India, Vietnam and Thailand (i.e. most of developing Asia) similarly intend to increase natural gas consumption. During the first three quarters of last year, China’s LNG imports increase by 4.4 Million Tonnes, equivalent to more than half the increase in U.S. LNG exports over the same period. 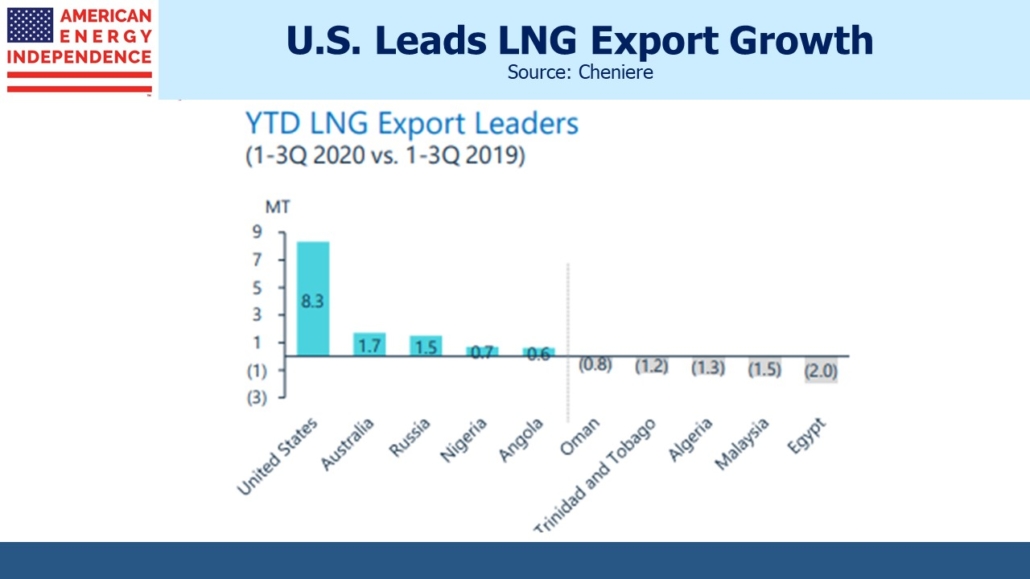 It’s why Cheniere’s stock is up over the past year, handily beating the energy sector. 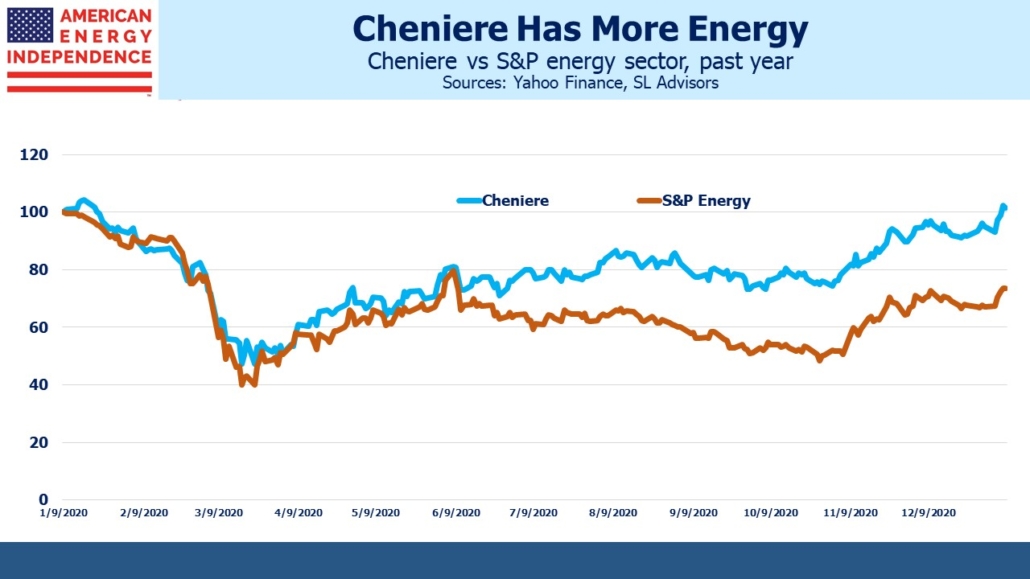 China’s motivation to switch from coal to natural gas for power generation is to reduce local pollution, a much bigger domestic concern than global warming. While the region around Beijing has largely eliminated coal power, China is building almost as many new coal plants as the U.S. currently has operating (see Fighting Climate Change Is Hard).

Japan relies almost completely on imported LNG for its natural gas. Around 30% of this comes from the U.S. Japanese power generation relies on coal and natural gas for almost two thirds of its output.

The Fukushima nuclear disaster led to sharp reductions in nuclear power, which increased the need for fossil fuels. Although this has been partially reversed over the past couple of years, natural gas remains vital and its superior carbon footprint is likely to give it an edge over coal for some time.

If our incoming Climate Czar John Kerry wishes to offer Japan and China some advice on the subject, he might suggest emulating the U.S. in using more natural gas to reduce emissions. It would be a pragmatic way to pursue the fight against climate change while also benefiting the U.S. economy.

U.S. natural gas is among the cheapest in the world, and our exports are the fastest growing. The opportunity for America to provide cheap, clean-burning natural gas to developing Asia is enormous. Increased energy consumption to drive rising living standards is assured in non-OECD countries. Let’s see if John Kerry is sensibly pragmatic or perversely progressive. Bond Investors Are Right To Worry

Public policy is becoming more important to energy investors. Democrats now own the climate change issue. The desire of progressives to advance a world of solar panels and windmills is confronting pragmatists who’d like to keep the lights on. END_OF_DOCUMENT_TOKEN_TO_BE_REPLACED

Many observers dislike Goldman – their continued success and adept avoidance of mistakes made by others leads to grumbling of sharp practice. END_OF_DOCUMENT_TOKEN_TO_BE_REPLACED

Goldman almost always sidesteps trouble. That’s one of the conclusions from the Archegos blow-up that is estimated to have cost the firm’s lenders as much as $10BN. END_OF_DOCUMENT_TOKEN_TO_BE_REPLACED

In November, Engie, a French utility, pulled out of discussions with NextDecade Corp (NEXT) to import up to $7BN of Liquified Natural Gas (LNG). It was a big blow to NEXT, which is seeking partners to underwrite its construction of an LNG export facility in Brownsville, TX. Engie concluded that the natural gas sourced by NEXT would be tainted by its involvement in fracking, methane leaks and flaring. It wasn’t consistent with their energy transition goals. END_OF_DOCUMENT_TOKEN_TO_BE_REPLACED