As we noted last week, the world doesn’t need another anodyne “2022 Outlook”. So we’ve put together a set of upside scenarios that are plausible but not consensus.

Last week we published The Upside Case For Pipelines – Part 1. This examined factors unrelated to commodity prices that could provide the sector a boost. This blog post considers what might boost oil and gas prices, which would likely provide a lift to the sector.

They fall into four categories – cyclical, geopolitical, Covid and the energy transition.

1) Cyclical factors that are bullish

Reduced growth capex has become a positive habit for the energy industry. Depletion of oil and gas wells is 2-4% of production – meaning that the industry needs to invest in that much new supply just to stay even. Crude oil demand has obviously been volatile over the past couple of years, but looks likely to reach new record levels over the next couple of years, driven by growth in emerging economies. The industry seems poorly positioned to meet this extra demand. 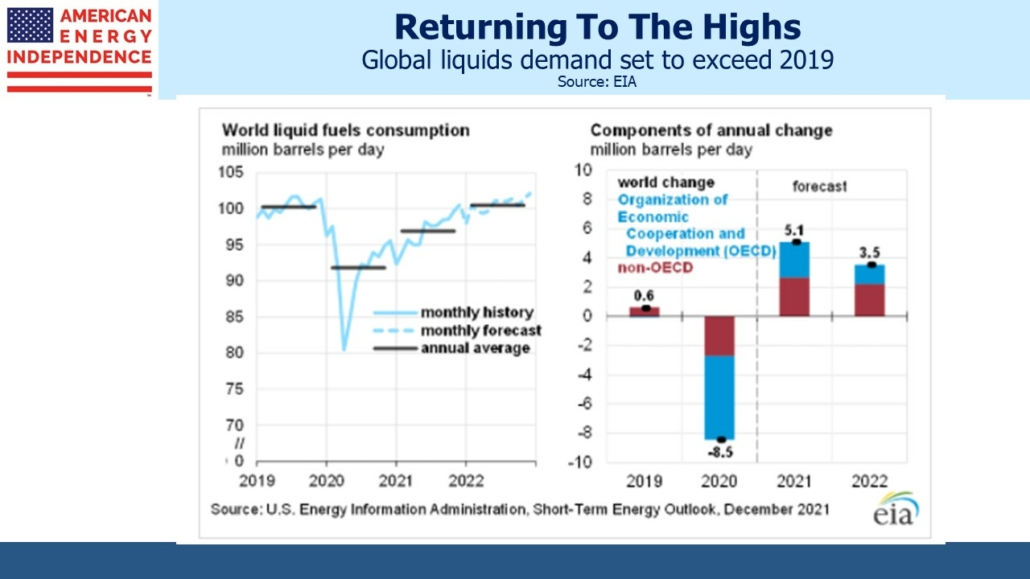 Capex is down 2/3rds from its 2014 peak, and the industry shows little inclination to boost it in spite of high prices and entreaties from the Administration. RBN Energy expanded on this theme in September (see Where Has All The Capex Gone? E&P Investment Down Despite Rising Prices And Cash Flows). 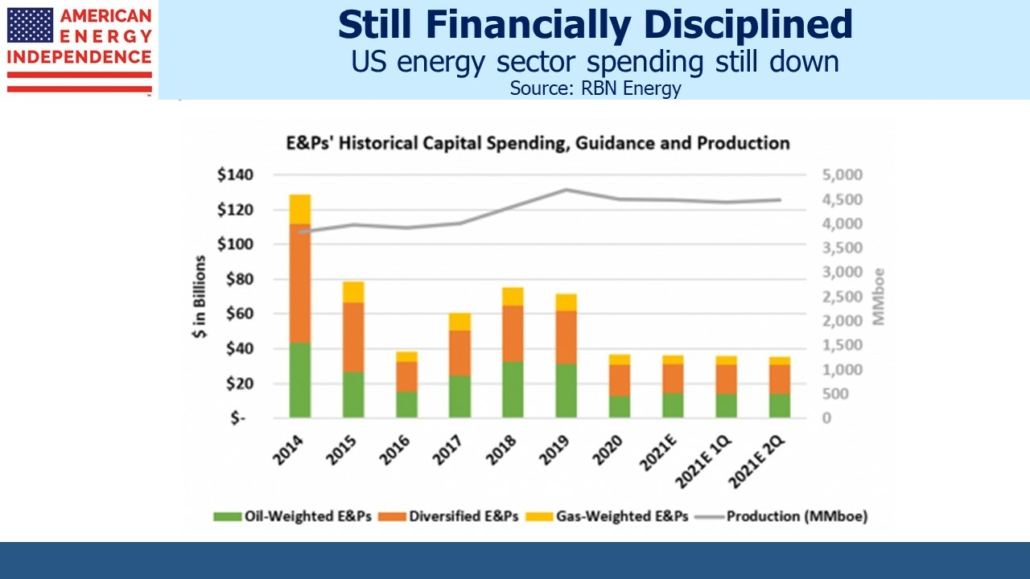 Global oil inventories have been drawing down since early last year, leaving little excess available. Moreover, OPEC countries are producing well within their stated capacity, which leads some to suspect that their actual maximum production capability is less. 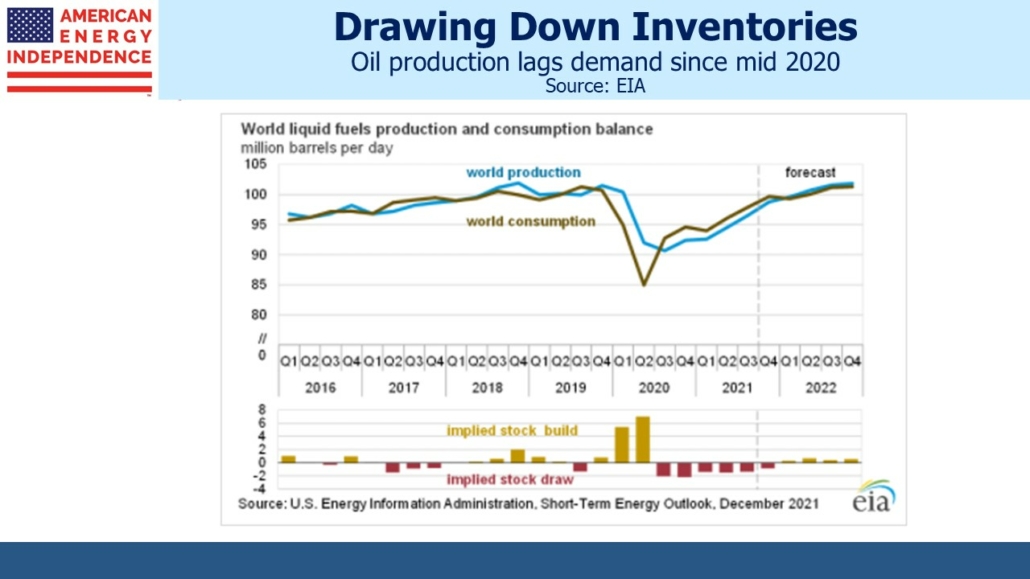 The story is similar with natural gas, except that global demand is more clearly rising. Because transportation costs are relatively high, regional prices vary substantially. TTF futures, the European natural gas futures benchmark, are priced at the equivalent of $26 per Thousand Cubic Feet (MCF) for January 2023, lower than the $29 equivalent price of the front month January 2022. US prices are one seventh of this, so the prospects for continued growth in shipments of US Liquified Natural Gas (LNG) to Europe and Asia look good. 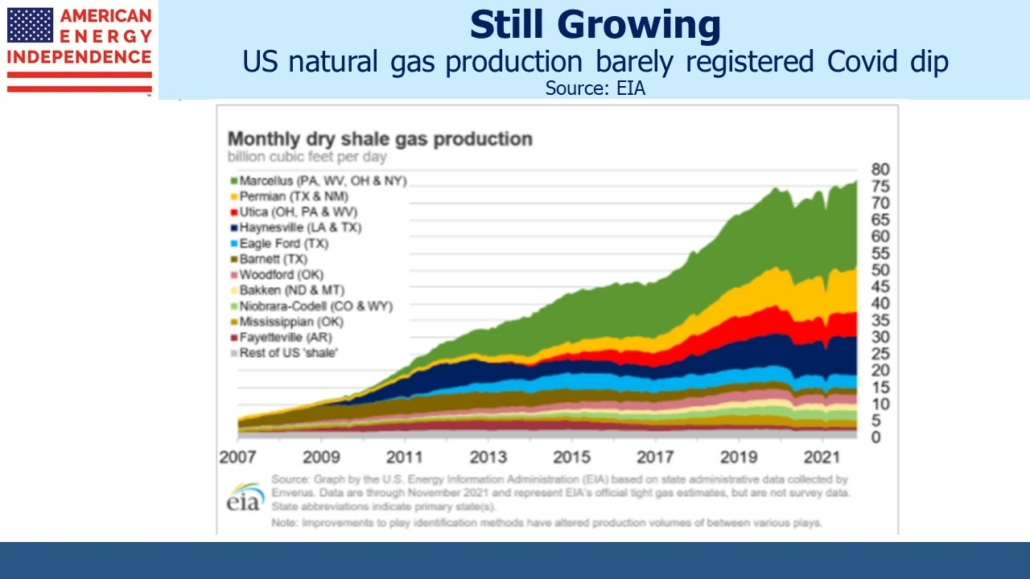 Against this positive backdrop for prices, it’s worth remembering that oil services companies shrank payrolls in response to the drop in capex, so even if spending did ramp up it would take time for the industry to rehire and retrain.

Lastly, economies around the world have been improving their energy efficiency. The US is no exception. Adjusted for inflation, it takes 60% less energy per $ of GDP output than was the case in the 1970s. Therefore, energy prices have a smaller impact on the economy today, making it better able to withstand higher energy prices than in the past. 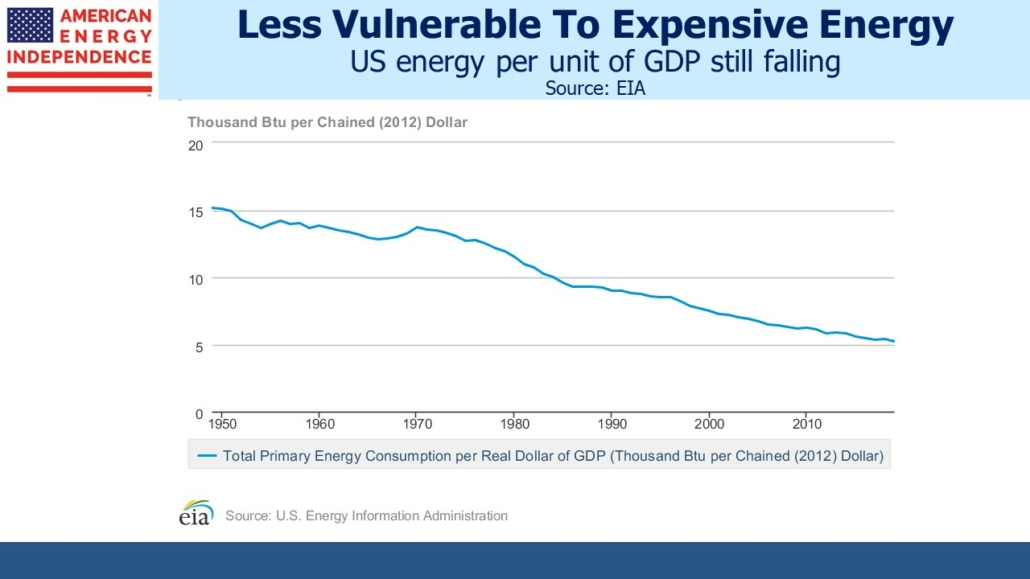 The middle east remains one of the less stable regions of the world. A fifth of the world’s crude and an increasing amount of natural gas pass through the Strait of Hormuz. Although it’s unlikely Iran could ever cause more than a temporary disruption to supplies, the threat remains, along with the possibility of conflict breaking out elsewhere. The world has very little spare capacity, so is vulnerable to surprises here. A failure in the Iran negotiations over nuclear weapons would keep Iranian oil mostly off the world market.

Russia’s growing military threat to Ukraine is another flashpoint where armed conflict could disrupt supplies of Russian natural gas to western Europe. Nordstream 2, the controversial natural gas pipeline from Russia to Germany, is completed but not yet operational pending German and EU regulatory approval. Conflict in Ukraine might delay its start indefinitely – likely a factor behind the elevated price of January ‘23 TTF natural gas futures noted above.

3) Covid loses its ability to disrupt

The Omicron variant is highly infectious and milder than preceding variants. It is causing far fewer hospitalizations and research shows why it’s causing less severe illness (see Studies Suggest Why Omicron Is Less Severe: It Spares the Lungs).

Economic disruption from Covid has come mostly from the mitigation steps countries have taken to curb its spread. In the near term, Omicron’s fast rate of spread is likely to drive global supply disruptions in a more synchronized matter. Former FDA Commissioner Dr Scott Gottlieb has become a widely followed resource on covid, and he expects in 2022 we will “…go from a pandemic into a more endemic phase,” as countries learn to live with Covid without noticeable disruption.

As the world opens up, energy demand will increase especially in Asia where many borders have remained partially or fully closed. International air travel remains the one weak point in liquids consumption, and a rebound could push crude prices higher. We’ve already seen prices reach $80 recently without these sources of extra demand.

So far there’s little sign that renewables are reducing the world’s demand for oil, gas and coal. Higher prices for fossil fuels remain inevitable if consumers are to switch to other forms of energy. The failure of COP26 in Glasgow may lead to renewed unilateral efforts by policymakers to reduce emissions. Curbing coal remains the obvious target – consumption limits or wider use of carbon taxes would drive demand for natural gas as the closest substitute, and to a lesser extent crude oil.

New Year’s Day brought an encouraging report that the EU will classify nuclear power and, in certain cases, natural gas as “green” energy. The requirements for natural gas include that it’s being used to replace coal, and that its emissions are no higher than 270g per Kilowatt Hour (KWh). Natural gas emits 180g per KWh, so even allowing for conversion losses this ought to be an achievable benchmark.

Assuming the news report is comfirmed, EU endorsement of natural gas as part of the energy transition solution is a long term very postive development for the natural gas industry. It will likely add momentum to emerging economies and perhaps even the US to adopt a similar approach. It should be supportive of natural gas demand and correspondingly negative for coal.

The energy crisis of 2021, which exposed some countries’ overly hasty embrace of renewables, showed that traditional sources of energy are vulnerable to sudden price jumps.

Any of the factors above or some in combination could drive oil and gas prices higher, potentially much higher, which would support already improving sentiment in the energy sector.

The post The Upside Case For Pipelines – Part 2 appeared first on SL-Advisors. The Continued Sorry Math Of Bonds Last week we published The Upside Case For Pipelines – Part 1. This examined factors unrelated to commodity prices that could provide the sector a boost. This blog post considers what might boost oil and gas prices, which would likely provide a lift to the sector. END_OF_DOCUMENT_TOKEN_TO_BE_REPLACED

If you were a commodities-focused investor and had success over the last decade, iron probably had something to do with your performance. Indeed, according to this chart from S&P Global Platts below, iron ore futures "drastically" outperformed most other metals and mining equities since 2015. END_OF_DOCUMENT_TOKEN_TO_BE_REPLACED

Part 1 of a two-part look at what could create upside surprises for midstream energy infrastructure. The downside is well understood and was experienced in full force quite recently. On March 18, 2020 the Alerian MLP Index (AMZIX) closed down 67% for the year. The broad-based American Energy Independence Index (AEITR) was marginally better at down 63%. There’s no plausible downside scenario that can beat that for a live ammunition drill. Within 19 months the two indices had rebounded 220% and 264% respectively. END_OF_DOCUMENT_TOKEN_TO_BE_REPLACED

The media referred to the Fed’s “hawkish pivot” following Wednesday’s revised dot plot and faster taper. More accurate is that chair Jay Powell confirmed that the FOMC was following the market’s earlier revisions to the rate outlook. Eurodollar futures traders and the Fed are once more synchronized over the next couple of years in looking for the Fed Funds rate to reach around 1.5%. Forecasts diverge beyond that, with fixed income traders comfortable that rates will peak, whereas FOMC members expect continued increases. When it comes to forecasting even their own actions, history shows the Fed has much to be humble about. END_OF_DOCUMENT_TOKEN_TO_BE_REPLACED

Since launching our ambitious series on commodities, we have spent a significant amount of time on energy. That's with good reason: according to the latest reading of the U.S. Consumer Price Index that has markets jittery and the Federal Reserve dreaming of interest rates, energy prices are up 33 percent, compared to 6.8 percent for all goods. But if energy prices have spiked suddenly, hiding in plain sight of the global inflation story are food prices, which have steadily increased since May 2020, when pandemic-related economic shutdowns started impacting agricultural supply chains. END_OF_DOCUMENT_TOKEN_TO_BE_REPLACED