Earnings season for pipeline stocks begins on Wednesday 22nd, with Kinder Morgan (KMI) reporting after the market close. We expect the quarterly updates from the sector’s biggest companies will confirm the progress towards improved profitability (see Pipeline Cash Flows Will Still Double This Year). We’ll also hear from management teams how they regard the prospects for new projects.

Last year, a stand-off over Kinder Morgan Canada’s proposed Trans-Mountain Expansion halted construction. Opposition from environmental extremists in British Columbia thwarted oil-rich Alberta’s goal of increasing its access to export markets. The Canadian government bought the pipeline, saving KMI from a costly, intractable problem between two Canadian provinces. Enbridge commented in a call that they wouldn’t attempt to build a new oil pipeline in Canada, unless it was wholly within energy-friendly Alberta (see Canada Looks North to Export its Oil). 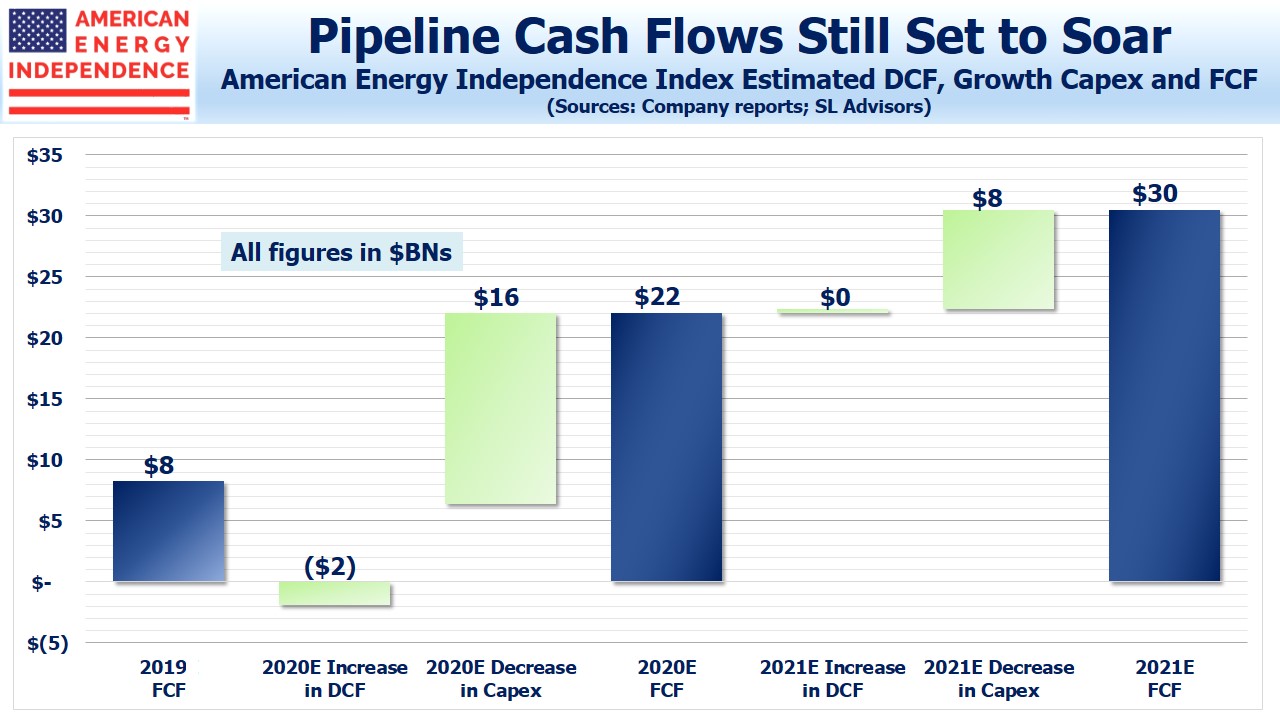 Following the cancelation of the Atlantic Coast Pipeline (see Pipeline Opponents Help Free Cash Flow), the continued legal uncertainty over already completed Dakota Access Pipeline (listen to  Judicial Over-Reach on the Dakota Access Pipeline) and the perennially delayed Keystone XL, big projects look similarly stymied in the U.S. Given the trends in election opinion polls and economic uncertainty over Covid, we expect few new initiatives for the balance of the year and possibly some further cancelations.

Although management teams will be frustrated, long-time investors in pipelines are realizing that poorly informed yet effective environmental extremists are an unlikely ally in leaving the sector with few options for its excess cash beyond returning it to investors through dividend hikes and buybacks. We expect this theme to play out over a couple of years. We suspect Berkshire’s interest in acquiring Dominion’s natural gas pipeline network is to redeploy the cash it generates to other Berkshire subsidiaries where capex is not controversial. 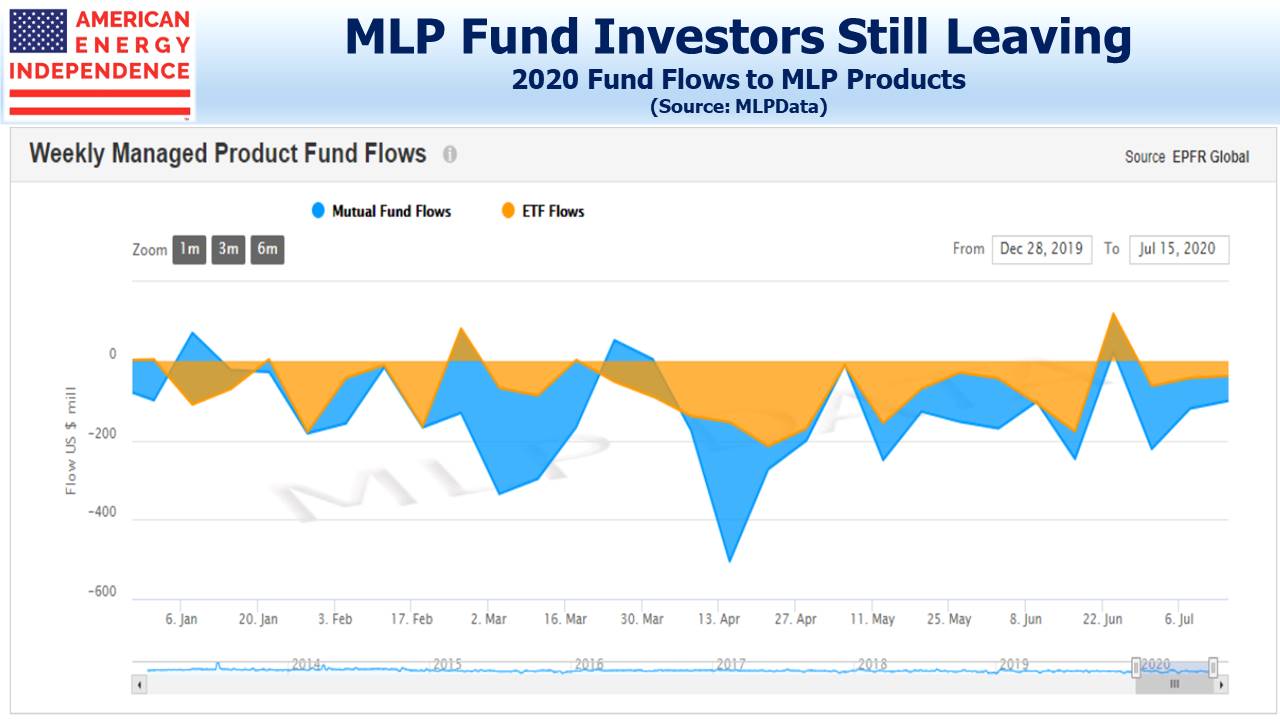 Investors continue to withdraw money from MLP-dedicated open-end funds. JPMorgan recently reported that during the first half of this year such outflows totaled $764MM, with June marking the fifth straight months of redemptions. 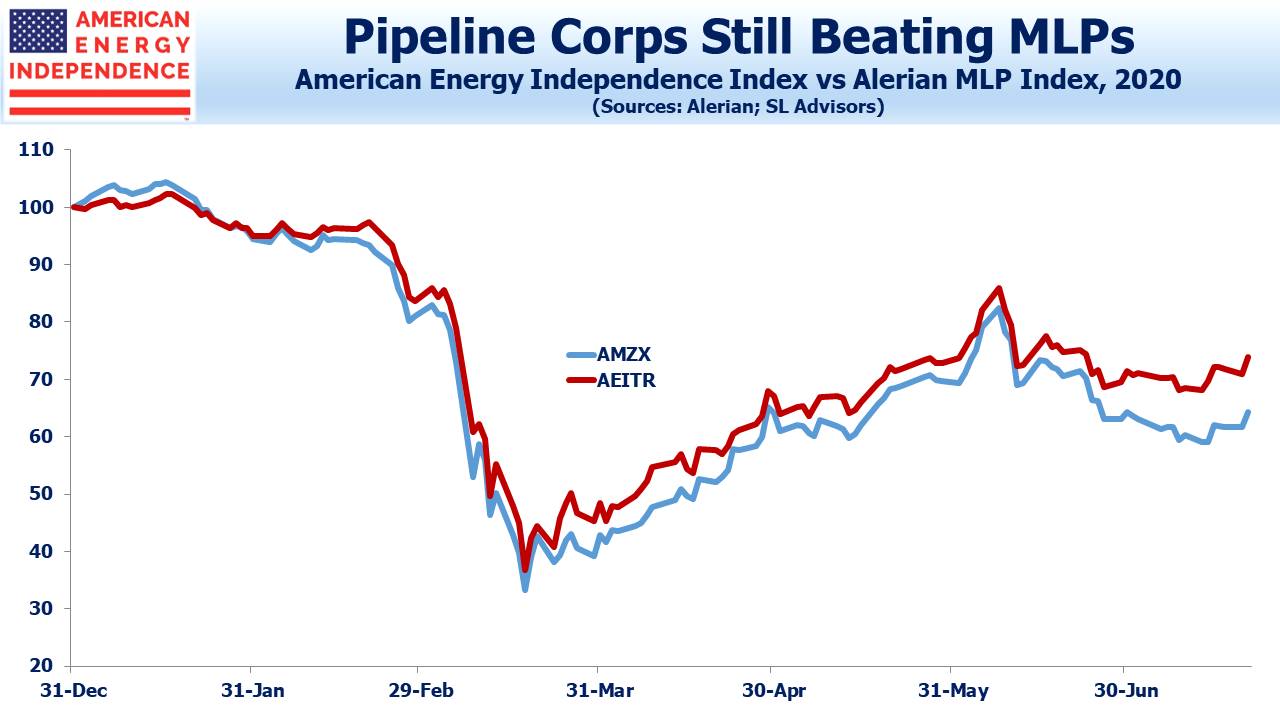 This is clear from relative performance, which shows the Alerian MLP Infrastructure Index (AMZIX) down 33% so far this year, lagging by 10% the more broadly representative American Energy Independence Index (AEITR). Corporations, which dominate the AEITR, have more numerous buyers than MLPs, which is why AMZIX is slumping. A broader set of investors and better governance are widely regarded as favoring corporations. Investor behavior is confirming this trend, which we expect to continue.

Stocks and bonds have appeared to reflect wildly different economic forecasts for years, which is why stocks always look cheap. The contrast between fixed income and equity investments is most dramatic in pipelines (see Pipeline Bond Investors Are More Bullish Than Equity Buyers). To cite one example, Enterprise Products Partners (EPD) has several 30-year maturity bond issues outstanding with yields from 3-3.2%. The company is a third owned by insiders, never cut its distribution and pays a 9.8% dividend. Skeptics of its equity might benefit from chatting with a few EPD bond holders.

We are invested in EPD and KMI, and all the holdings of the American Energy Independence Index via the ETF that tracks it.

This whitepaper provides trade examples using seasonal charts as guidance for positioning when taking seasonal factors into consideration. Long-only, indexing, and other passive commodity investing strategies may not address seasonal factors, treating investing in commodities as if they were equities, even though they are very di¬fferent. END_OF_DOCUMENT_TOKEN_TO_BE_REPLACED

Before the Shale Revolution, midstream energy infrastructure was a boringly stable sector. MLPs, which predominated versus corporations back then, paid out most of the cash they generated and grew distributions through price escalators and improved operating efficiencies. END_OF_DOCUMENT_TOKEN_TO_BE_REPLACED

Next, looking at last week’s Commitment of Traders report from the CFTC, it follows the higher gold prices as large speculators increased their positions from 252,000 to 267,000. However, it also shows that commercial traders added to their short positions going from -287,000 to -301,000. END_OF_DOCUMENT_TOKEN_TO_BE_REPLACED

Client meetings for many businesses have had to conform to... END_OF_DOCUMENT_TOKEN_TO_BE_REPLACED