Pipeline companies have been reporting earnings. As has been the case recently, they’ve been generally coming in as expected, reflecting the stability in their underlying businesses. In many cases it’s hard to see much Covid impact at all. Williams Companies (WMB) reported 3Q adjusted EBITDA down 1% year-on-year.  Enterprise Products Partners (EPD) was similar. 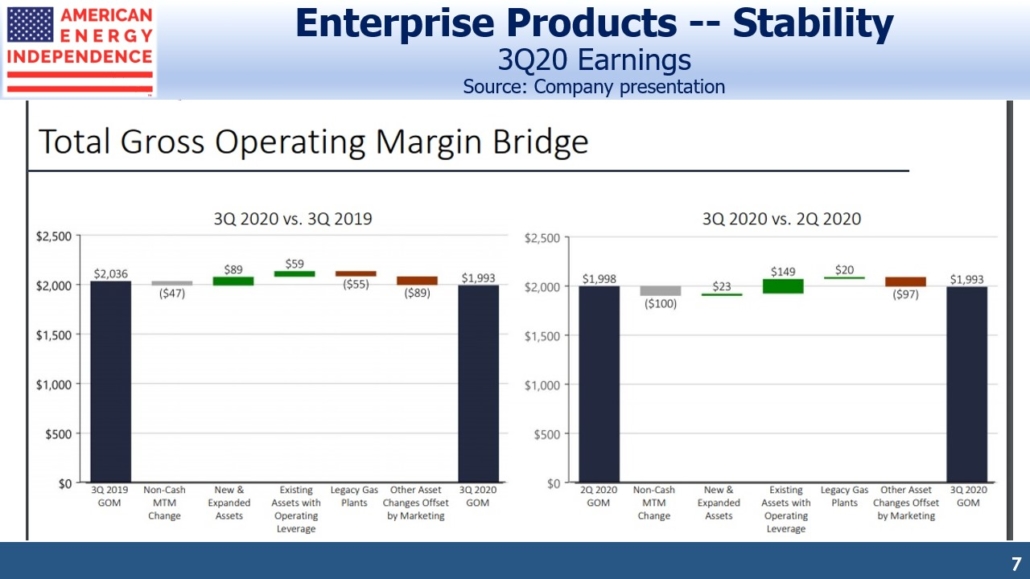 A bigger story has been the growing trend towards announcing buybacks. This is a visible confirmation of growing free cash flow (see Pipeline Cash Flows Will Still Double This Year, posted in May and remaining accurate ever since). 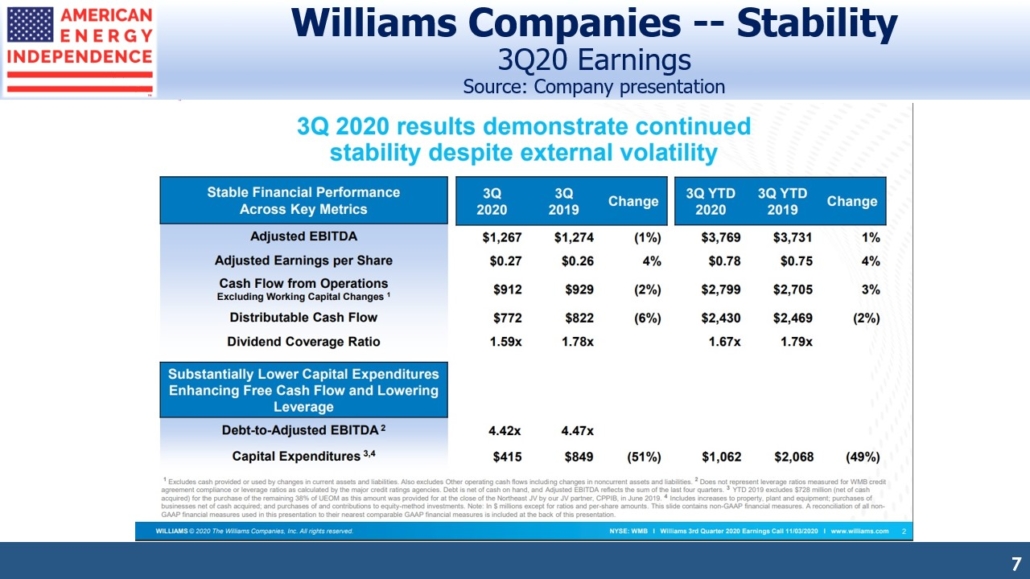 EPD has had a buyback program in place for the past year. Kinder Morgan (KMI) and Energy Transfer (ET) have both said that buybacks are a possible way to return cash to shareholders in the future. More tangibly, MPLX announced a $1BN buyback last week. Targa Resources (TRGP) and Plains all American (PAGP) followed up with $500MM each. Enlink announced $100MM.

Midstream energy infrastructure has been weighed down by a steady stream of outflows from MLP-dedicated mutual funds and ETFs — around $6.5BN over the past year. With over $2BN in new buyback announcements just last week, this source of additional demand could well absorb future sales by funds. This would allow the increasingly positive cash flow story to unfold, lifting prices. 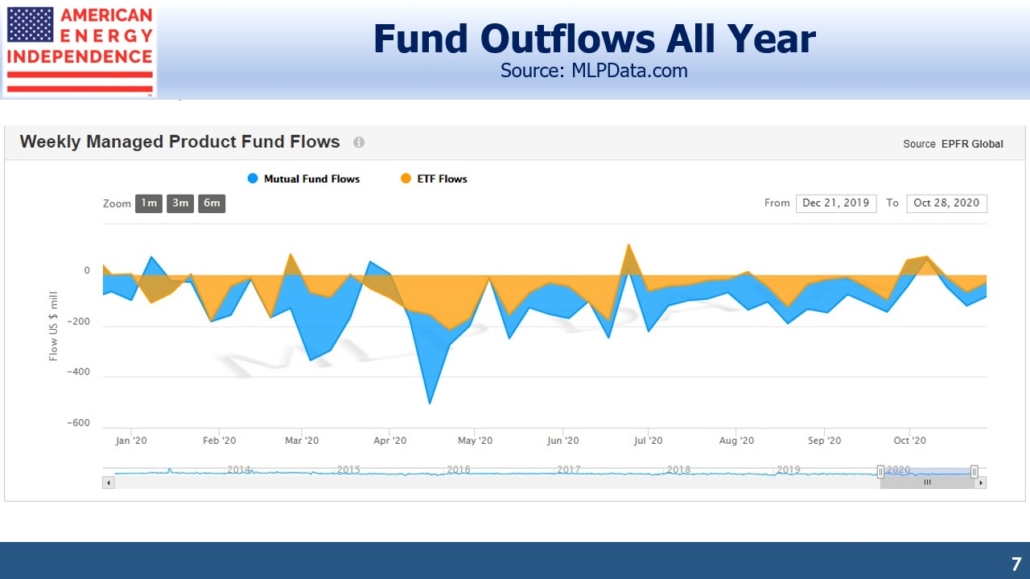 An interesting perspective on the value of dividends was provided by Altus Midstream (ALTM). Operating with 5X Debt:EBITDA and questionable prospects in its natural gas gathering and processing business, it has been a target of short sellers for some time. Covid has reduced crude oil output in the Perman basin, thereby reducing the volume of associated natural gas which has allowed prices to rise. 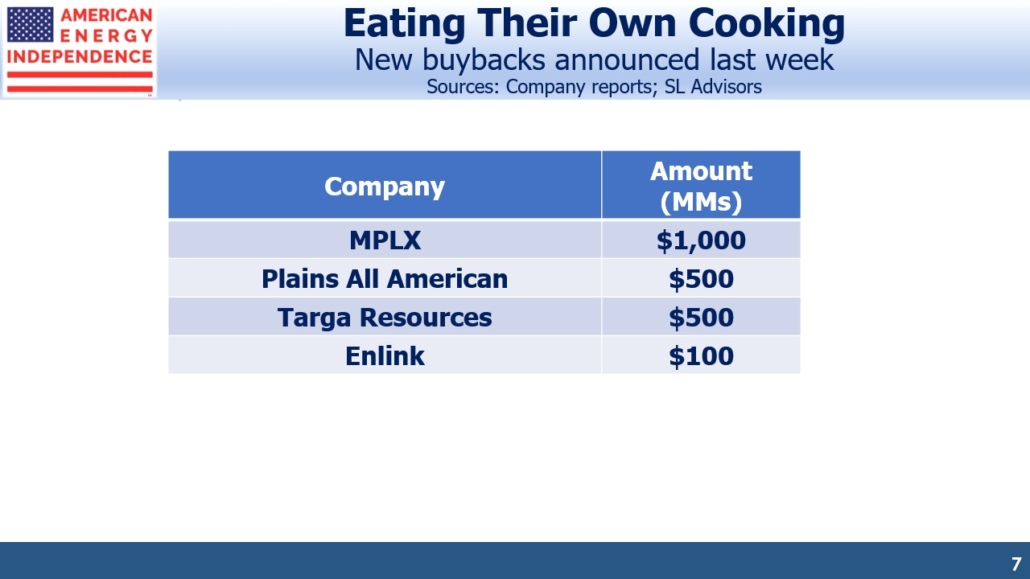 ALTM surprised the market by instituting a quarterly dividend of $1.50, starting next March. Forget the financial theory that dividends don’t matter – ALTM tripled in price on the announcement. Even after adjusting to the news, at $30 the stock will yield 20% when dividends start next year.

With Republicans looking likely to retain control of the senate, pipeline investors can contemplate little prospect of any sweeping legislation that might harm the energy sector. But a President Biden is likely to use regulation and executive actions to further impede new construction. On Energy Transfer’s earnings call on Wednesday, executives commented that an extensive network already installed must have even more value when little new can be built. We discussed this and included clips from the earnings call on Friday’s podcast (listen to Energy Executives and the Election). We’ve dubbed it “Goldilocks Gridlock” from the perspective of the energy sector.

We also provided a brief update of the post-election outlook in the SL Advisors Post-Election Energy Outlook webinar.

The post Pipeline Buybacks Are Coming appeared first on SL-Advisors. ESG is in the eye of the beholder. There are multiple lists of stocks that score well on Environmental, Social and Governance metrics. My favorite is Lockheed Martin (LMT), a perennial member of the Dow Jones Sustainability Index. If building weapons to blow up people and property can be done in a sustainable way, then ESG is a generous mistress (see Pipeline Buybacks and ESG Flexibility). END_OF_DOCUMENT_TOKEN_TO_BE_REPLACED

This post provides 10 stocks out of the Nasdaq-100 Index that investors can expect to benefit from a rise in inflation and 10 stocks that are expected to be negatively impacted by a rise in inflation. Financial advisors and investors need to be aware of how inflation is likely to impact their holdings and portfolios. END_OF_DOCUMENT_TOKEN_TO_BE_REPLACED

“Coiled, ready to go.” is how JPMorgan CEO Jamie Dimon described consumers last week. “Consumers have $2 trillion in more cash in their checking accounts than they had before Covid.” he added. Borrowers are in such good shape that JPMorgan reported a 4% drop in loans when they released their quarterly earnings. Stimulus cash is being directed towards debt repayment. END_OF_DOCUMENT_TOKEN_TO_BE_REPLACED

Public policy is becoming more important to energy investors. Democrats now own the climate change issue. The desire of progressives to advance a world of solar panels and windmills is confronting pragmatists who’d like to keep the lights on. END_OF_DOCUMENT_TOKEN_TO_BE_REPLACED