Targa Resources, a perennial mis-allocator of capital, is not an obvious candidate to initiate a buyback program. Nonetheless they did on Monday, and the stock rose almost 11% on the news. In February last year, when Joe Bob Perkins was CEO, he responded to questions about their capex plans by arrogantly calling them “capital blessings.” This reflected an attitude that building new infrastructure and buying assets was part of their mission, regardless of whether such projects made financial sense.

TRGP’s stock performance says much about how they have allocated capital in recent years. It’s lost almost two thirds of its value over the past year, and 88% from its all-time high in 2014 when Energy Transfer was believed to be interested in acquiring them. Perkins remains with the company as Executive Chairman, having undelivered and been overpaid. 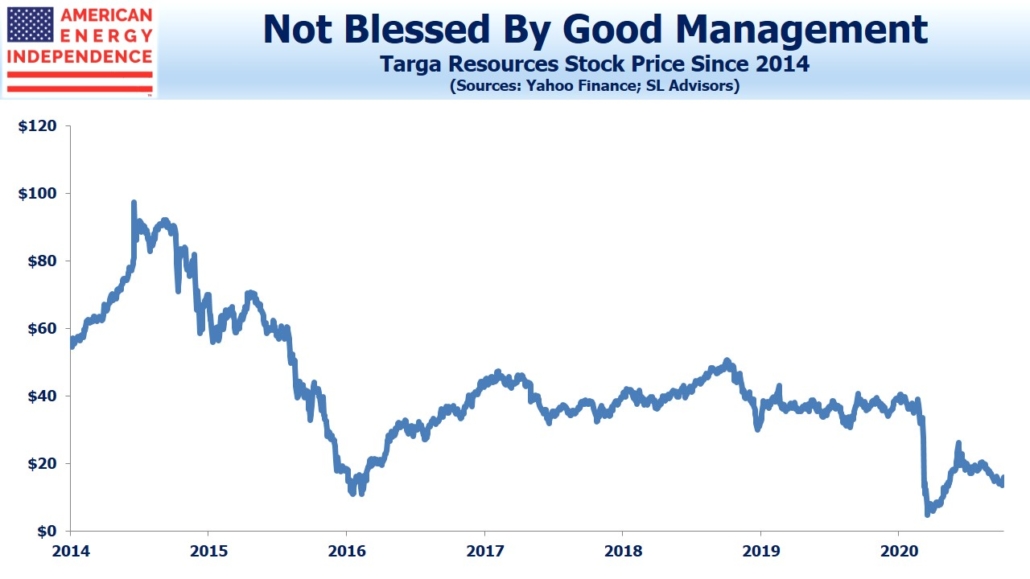 If the buyback reflects a new respect for the math behind how the company deploys its cash, it represents an overdue shift. TRGP is on track to begin generating Free Cash Flow (FCF) next year. Although buybacks allow plenty of discretion around timing, the market welcomed the announcement that $500MM would be dedicated to repurchasing stock.

TRGP’s buyback program is roughly equal to their expected 2021 FCF, so they’re to complete the program quickly. But it’s worth noting that, if the industry similarly dedicated its 2021 FCF to buybacks, that would amount to $40BN in purchases, twice the size of all the mutual funds, closed end funds and ETFs in the sector. There’s much more FCF available than what’s at TRGP. 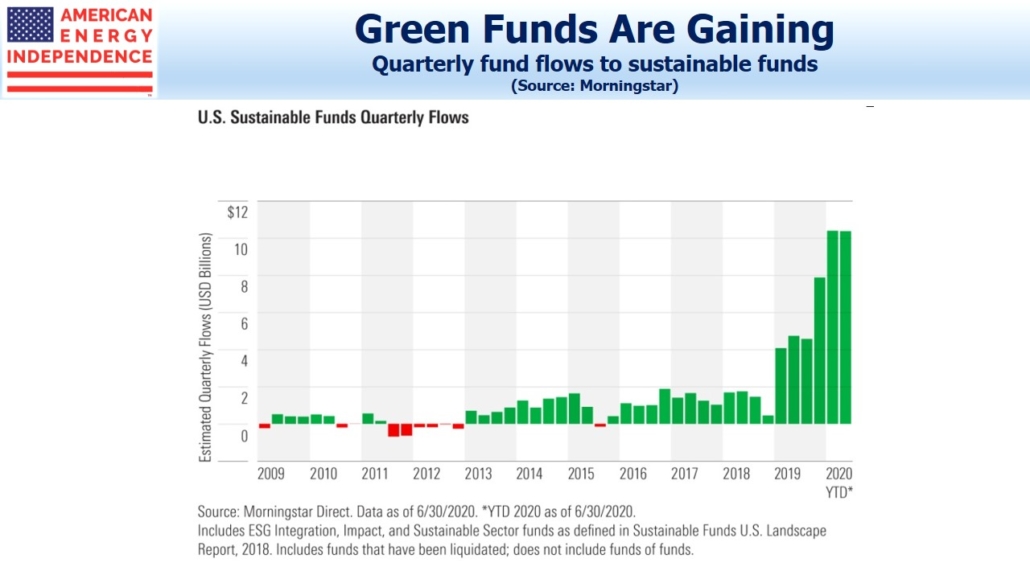 In another sign that the MLP structure retains few friends, TC Energy (TRP) announced they’d be buying in the rest of TC Pipelines (TCP) that they don’t already own. With a 9% yield and limited investor base, TCP isn’t much use as a source of capital. It’s down 23% over the past year, whereas TRP has dropped 15%. Without a ready pool of K-1 tolerant income-seeking buyers, TRP concluded there was little value in maintaining their MLP.

Both TRGP and TRP are buying their own securities, which they deem undervalued. This is positive news.  As more of the industry follows suit, it will provide further support for a beaten-down sector.

On a different topic, Jared Dillian wrote an informative article (see ESG Investing Looks Like Just Another Stock Bubble) highlighting how much of the interest in ESG investing is a fad. Picking companies that possess good ethical values seems pretty reasonable – except that the beauty of ESG lies in the beholder. Because there are no agreed criteria, just about every company can claim such credentials, and most do. For example, coal producer Peabody Energy publishes an ESG report. 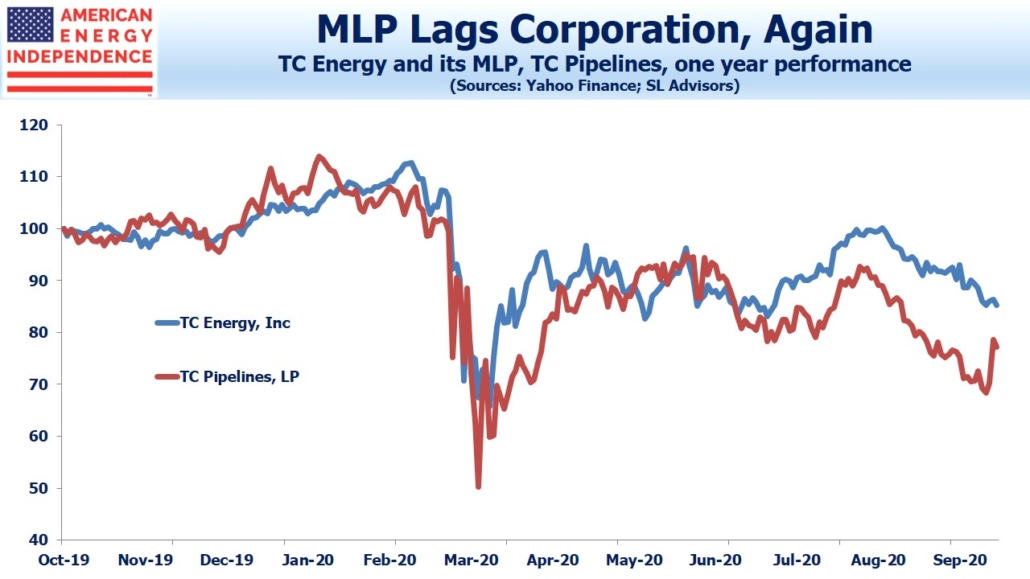 Dillian notes that much of the returns to ESG investing have been driven by liquidity. Inflows have surged over the past year, with Morningstar estimating almost $200BN invested in ESG funds.

Given the numbers involved, few companies can risk being non-ESG. Pipeline corporations are included (watch ESG Investors Like Pipelines), as they should be since increased use of natural gas is replacing coal in power generation. This is the biggest driver of reduced emissions in the U.S.

Confusingly, this means that Williams Companies’ (WMB) ESG credentials are based on successfully reducing demand for Peabody’s product.

MLPs generally don’t show up in ESG lists, because their weak governance (the “G” in ESG) disqualifies them. 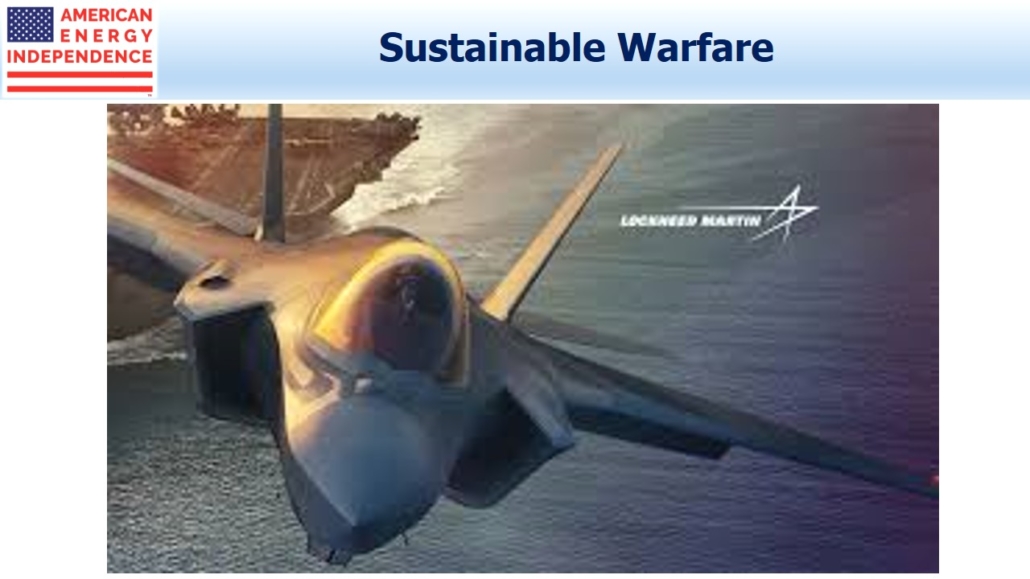 The infinite flexibility of ESG is shown by Lockheed Martin’s (LMT) regular inclusion in the Dow Jones Sustainability Index. Manufacturing products that blow people up sustainably meets the threshold. This is why Jared Dillian is right to say, “…ESG is nothing but a passing investment fad.”

We are invested in LMT and all the components of the American Energy Independence Index via the ETF that seeks to track its performance. In early November when Pfizer’s vaccine announcement triggered a strong rally, technology stocks lagged small cap value. Having been out of favor for years, the Russell 2000 sprang to life, drawing in buyers at the expense of tech. END_OF_DOCUMENT_TOKEN_TO_BE_REPLACED

The cold winter currently being endured in north-east Asia isn’t just a boon for those hoping the planet isn’t burning up. It is setting a fire under local prices for Liquified Natural Gas (LNG). Because of the relatively high cost of moving LNG by tanker, regional price differences can be far wider than for crude oil, where transportation costs are a much smaller portion of the overall shipment. END_OF_DOCUMENT_TOKEN_TO_BE_REPLACED

Although we generally write about investing in midstream energy infrastructure, we find macro subjects interest our readers too. In April, not long after the market low, The Stock Market’s Heartless Optimism was popular, as any guide to the market’s direction was eagerly sought. We regularly use the Equity Risk Premium (ERP) to illustrate the relative value of stocks versus bonds. Earnings forecasts never fell as far as the market, which is what propelled its rebound for the remainder of the year. END_OF_DOCUMENT_TOKEN_TO_BE_REPLACED

Writers care what their audience thinks, and we monitor pageviews and comments to learn what resonates. For pipeline investors, a few months into the year it was looking like the mother of all bear markets. The sector had been persistently lagging the S&P500 since peaking in 2014, and pre-Covid the fundamentals were improving strongly. Fortunately, the recovery since then has repaired much of the damage to portfolio values, if not the emotional scars from extreme volatility. The American Energy Independence Index is –13% for the year, compared with –51% at the end of 1Q.   END_OF_DOCUMENT_TOKEN_TO_BE_REPLACED

The biggest question for long term investors is why bond... END_OF_DOCUMENT_TOKEN_TO_BE_REPLACED