The hacking into Colonial Pipeline’s network demonstrated the high-tech vulnerability of some infrastructure as well as society’s reliance on it. Colonial is the largest privately owned pipeline in the U.S., carrying up to 45% of the east coast’s gasoline supply from refineries in Texas to New Jersey. On Monday gasoline futures initially rose 4% on fears of an extended outage before Colonial announced a goal of, “…substantially restoring operational service by the end of the week.”

Pipelines and other midstream energy infrastructure don’t command much public attention until there’s a problem. Enbridge’s Line 5 pipeline supplies 540,000 barrels per day of propane and crude oil to customers in Ontario, Quebec and Michigan.

Governor Whitman wants to close the pipeline because it runs under the Straits of Mackinac. She fears a leak, while Enbridge argues that it meets or exceeds all relevant safety standards. They’re also planning a replacement to the segment that passes under the Straits, the Great Lakes Tunnel Project. Enbridge CEO Al Monaco is pushing for approval to build the concrete tunnel which will house the pipelines so as, “to reduce the risk (of a spill) to as near zero as humanly possible.” 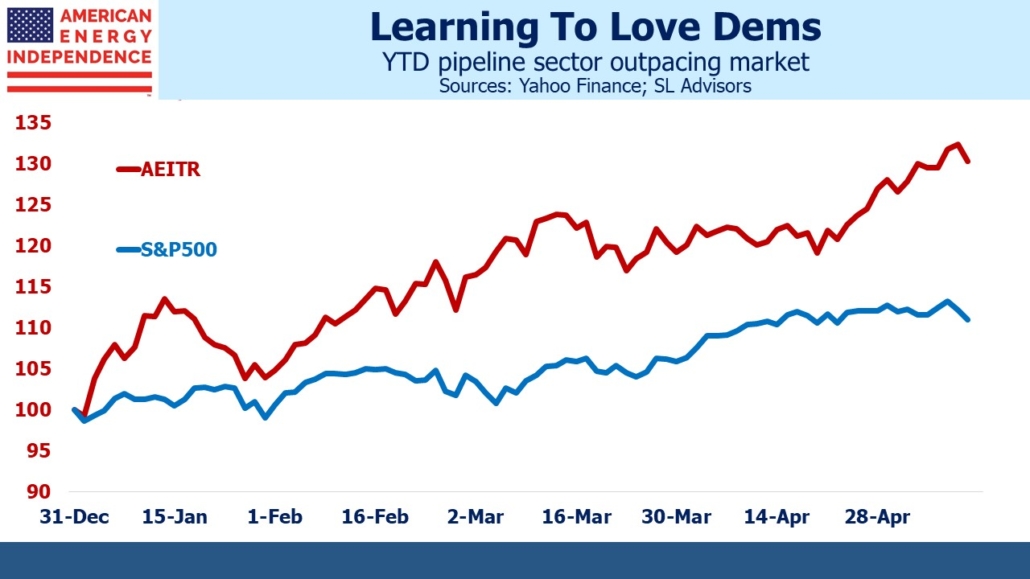 Governor Whitman’s closure order may cause Line 5 to be shut down this week. Al Monaco has warned this would result in a “very bad outcome” for consumers.

It must be tempting for companies like Enbridge to give political leaders what they want, including the consequences. One alternative to Line 5 would require 2,100 trucks per day. In New York’s Westchester county, Con Edison stopped accepting new natural gas customers because the state is impeding pipeline access. My partner lives in Westchester, and he has installed a back-up generator at his home to counter the state’s policies that favor less reliable energy.

If Enbridge’s Line 5 stops delivering crude oil to refineries in Michigan and beyond, gasoline prices will rise. Energy companies like Enbridge are more responsible than state governors such as Whitman and New York’s Andrew Cuomo.

February’s cold snap which led to power outages created windfall gains for pipeline companies. Energy Transfer gained $2.5BN, and after using the proceeds to help pay down $3.5BN in debt during 1Q21 is now expected to bring leverage (Debt:EBITDA) to to 4.5X by early 2023 rather than late 2024 previously. Kinder Morgan (KMI) picked up an extra $1BN, and Enterprise Products Partners (EPD) reported some benefit from sales of natural gas at high prices.

Proponents and critics of renewables have both used the Texas power cuts to support their case (see Why Texas Lost Power). All sources of energy came up short of what was needed. But the $Billions in extra profits generated by companies with natural gas infrastructure in the right place reflects their value. There were no reports of windmills or solar panels suddenly being in high demand. Natural gas changed hands at over 100X its normal price – the unique features of the Texas power market allowing uncontrolled price discovery. At least it was available. Additional solar and wind wouldn’t have been there even at 1,000X normal pricing.

Energy infrastructure has been outperforming the market since the Covid low in March of last year. President Biden’s policies have inadvertently helped, by constraining spending within the energy sector which is leading to higher energy prices. The market’s response to the Colonial cyber attack on Monday was to push stocks pipeline stocks higher. It highlighted the critical nature of the sector to the economy. The WSJ has suggested that Biden’s proposed infrastructure plan should dedicate money to protecting vital energy infrastructure – perhaps this sensible suggestion will find increased support.

Although the media makes it sound as if renewables are ubiquitous, last year wind was 8.4% of U.S. power generation and solar just 2.3%. Hydropower (7.3%) and nuclear (19.7%) don’t suffer from the intermittency of solar panels and windmills, so are more valuable.

The pipeline sector is benefiting from many recent developments. Companies are demonstrating greater financial discipline. Energy prices are rising, thanks to Democrat policies. Inflation expectations are up, helped by the profligate Covid relief bill and the Fed’s continued buying of bonds (see The Fed Is Playing With Fire in the WSJ), boosting demand for a sector that offers decent inflation protection. Finally, misguided policies in some states and cyberattacks by criminal gangs are highlighting the importance of energy infrastructure. First quarter pipeline earnings were full of positive surprises. It’s one of the very few cheap sectors remaining, which is why the American Energy Independence Index (AEITR) is 20% ahead of the S&P500 this year. Fed chair Jay Powell appeared slightly less confident at Wednesday’s press conference. He acknowledged that their forecast of temporarily higher inflation might be wrong, and it was hard to say when it would moderate. He repeated his warning that, “forecasters have much to be humble about.” END_OF_DOCUMENT_TOKEN_TO_BE_REPLACED

This past winter included some tumultuous weather events with implications for global energy markets. Winter storm Uri exposed vulnerabilities in the Texas power grid, and left millions without heat during an unusually cold snap (see Why Texas Lost Power). END_OF_DOCUMENT_TOKEN_TO_BE_REPLACED

Last week the Alerian MLP and Infrastructure Total Return Index (AMZIX) finally recouped its Covid losses. MLPs have returned to where they were at the end of 2019, when few knew what a coronavirus or N95 mask was. MLP investors have had a miserable decade. END_OF_DOCUMENT_TOKEN_TO_BE_REPLACED

An enduring dichotomy in the valuation of midstream energy infrastructure companies has been the sharply different outlooks implied by debt versus equity pricing. Dividend yields of 6-7% suggest equity investors don’t regard their payouts as being sustainable indefinitely. END_OF_DOCUMENT_TOKEN_TO_BE_REPLACED