The Administration’s planned release of 1 million barrels of oil a day from the Strategic Petroleum Reserve (SPR) is borne of their frustration with high prices. Average crude prices have been higher under Biden than Trump, even after adjusting for the collapse during Covid (not Trump’s fault) and the jump following Russia’s invasion (not Biden’s fault).

For energy investors like us, Biden has been a huge improvement. Trump knew he wanted lots of production to keep prices low and promote American Energy Independence. Executives were emboldened by a government they perceived as supportive. The results were good for consumers but ruinous for investors.

Although the correlation between the price of crude and pipeline stocks isn’t as strong as many think, rising prices that reflect strong underlying demand have boosted returns. For the quarter just ended, the pipeline sector returned +24.6% versus –4.5% for the S&P500. 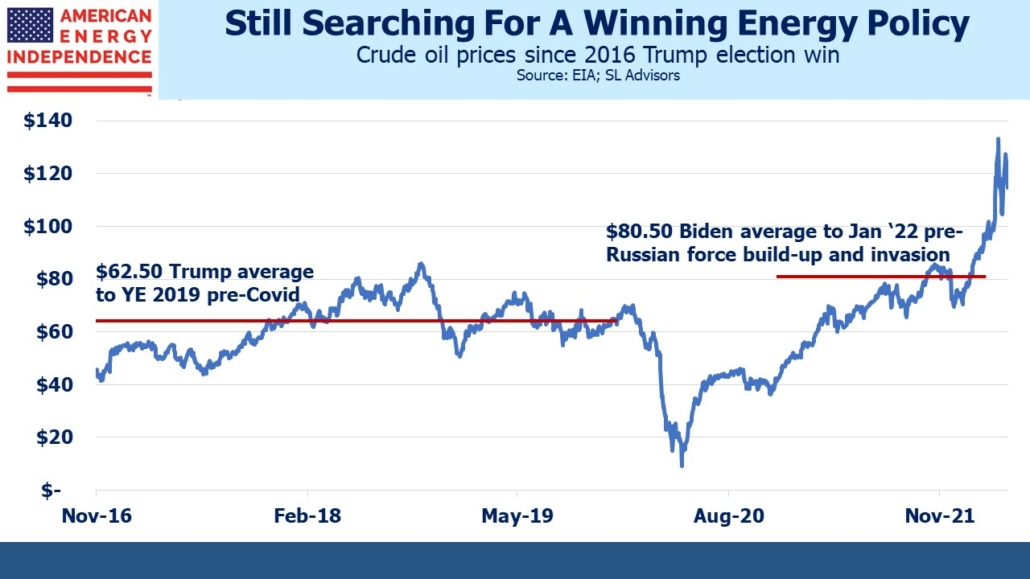 New Jersey still mandates attendants at gas stations to fill your car. It’s a trivial yet tiresome rule – people should have a choice to pump their own gas, since it’s quicker. But recently, watching the attendant as the register ticked up past $80, I nearly jumped out and gave him a high five. Clients of SL Advisors are benefiting from White House energy policies.

We hold a minority view. Presidents have less control over oil prices than voters think, although Biden could claim some credit for the energy sector’s resurgence if he wanted to.

The White House thinks US energy companies are being abstruse in failing to respond to higher prices by increasing production. They must have advisers that understand why the sector is apparently denying itself even greater profitability, but their public comments and policies don’t reflect this.

Crude oil is in backwardation, meaning that the futures strip is downward sloping. Spot oil prices get the attention because they drive what voters pay at the pump. Production decisions are based on what produced oil and gas can be sold for over the next few years. As with almost any business, capital has to be invested up front with the expectation of a future return. If the curve was upwards sloping (contango), that would allow drillers to sell forward production at prices higher than today’s, creating the additional supply the Administration wants. It’s been in backwardation for the past year, and Russia’s invasion exacerbated this – meaning the effect on prices was more pronounced on the front month futures that impact gasoline prices than it was on the rest of the strip which drives investment decisions. 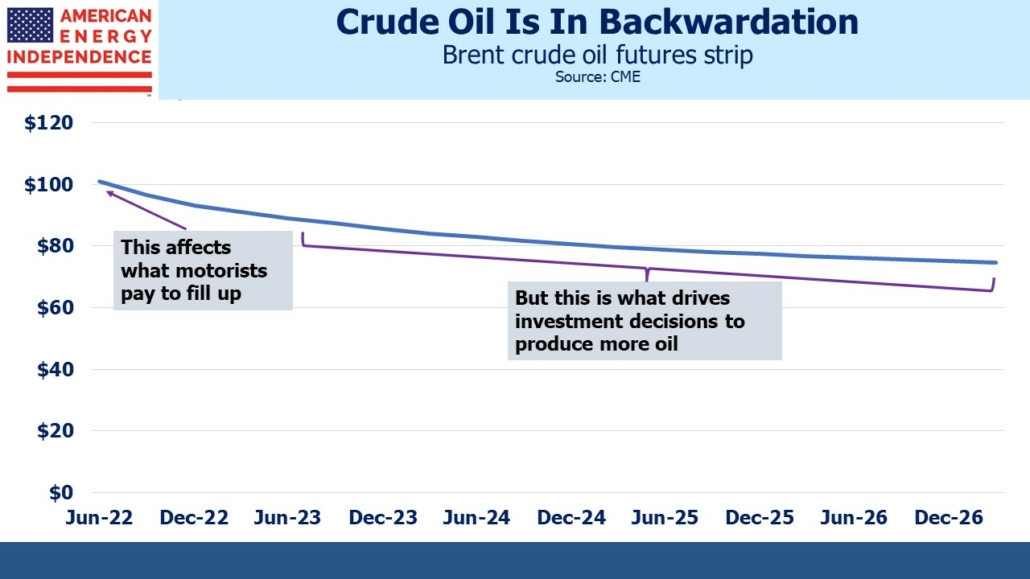 Moreover, oil companies can’t suddenly turn on a spigot. The list of reasons why current output hasn’t responded to prices as much as it might have five years ago includes (1) financial discipline, (2) White House long term anti-fossil fuel policies, (3) ESG opposition, (4) an increasingly capricious regulatory and judicial process for proposed and completed infrastructure projects, and (5) service provider inflation.

If you assume an oil well could be brought online in a year and produce equal volumes over the next four years, forward production could be hedged at $80, versus the June futures price of $101. Although futures prices are poor predictors, an E&P company that produces without hedging is just speculating on future oil prices. Investors can do that themselves with crude futures, so there’s little value added for the E&P company to do so themselves.

The SPR release of 1 Million Barrels per Day (MMB/D) over six months is an understandable political reaction, but isn’t likely to alter prices much, because it’s temporary. At about 1% of global demand, it will reduce our SPR to 345 million barrels, 48% of capacity and the lowest since 1983. Reducing crude in storage will increase our vulnerability to supply shocks from a hurricane for example. And depending on the compatibility between the grades of crude released and domestic refining infrastructure, these extra barrels may wind up being exported. 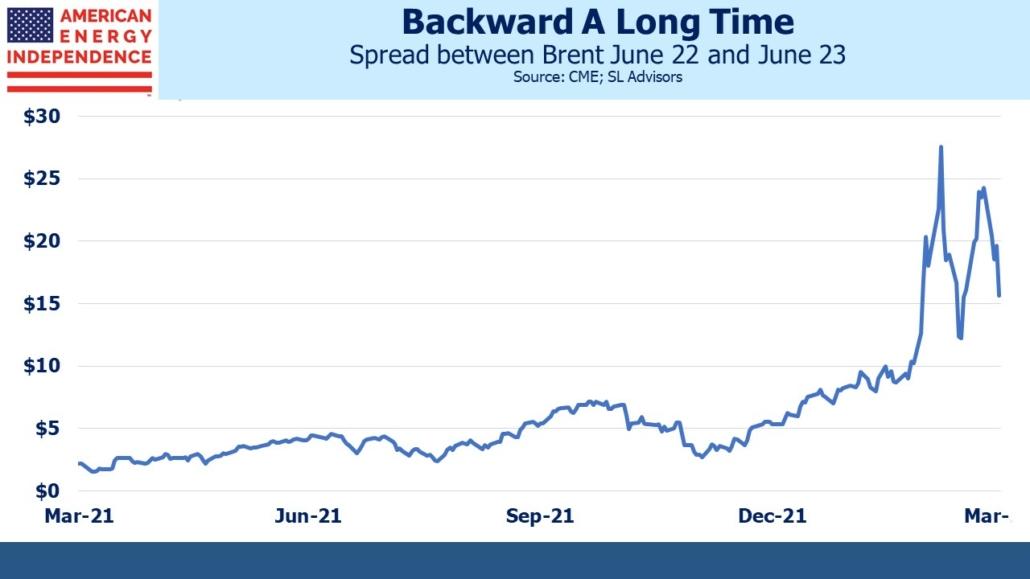 Goldman Sachs thinks use of the SPR in this way exposes the market to greater turmoil in the event of a further supply disruption from Russia.

For energy investors, it’s probably net positive. The economics of investing in new production are modestly worse than before the announced SPR release. But it doesn’t represent new supply, and the brief drop in prices delays the demand destruction that many analysts believe is the only way to balance the market. CEOs understand that the White House’s desire to increase supply is ephemeral and related to the mid-terms. The Administration will regain its former hostility to traditional energy just as soon as they can get gasoline prices off the news headlines.

Concrete steps to streamline the regulatory process and eliminate much of the uncertainty around infrastructure projects could induce some companies to invest more in future production. This is the area to watch for signs that pragmatism is informing the government’s energy policies.

The post Energy Investors Unfazed By US Selling Oil appeared first on SL-Advisors. Every investor is aware that the market’s been volatile recently. The VIX is high but converting it into typical daily moves isn’t intuitive. Several readers like the chart below, which shows what % of the last 100 trading days have seen the market move by more than 1% in either direction. It’s currently 55, so more than half of the past 100 trading days have seen such a move. END_OF_DOCUMENT_TOKEN_TO_BE_REPLACED

People may disagree on whether this Fed is hawkish or not, but reactionary is not a controversial adjective. They first demonstrated this in waiting eighteen months after the Covid vaccine and fifteen months after the last $1.9TN slug of fiscal uber-stimulus to roll back their monetary accommodation. Quantitative Easing (QE) is more aptly followed by Qualitative Tightening (QT*), since they regard the inverse of bond buying as letting holdings mature as opposed to auctioning their MBS holdings. END_OF_DOCUMENT_TOKEN_TO_BE_REPLACED

There were three stories last week that can best be characterized as providing energy realism. The fire at Freeport’s LNG facility sent US natural gas prices skidding, with the loss of 2 Billion Cubic Feet per Day (BCF/D) of export capacity. Freeport warned it’ll be at least three weeks before operations can resume – meaning 2BCF/D of additional natural gas in the US domestic market. Dutch TTF gas futures similarly rallied on fears of reduced supply. But both markets later reversed their initial move. END_OF_DOCUMENT_TOKEN_TO_BE_REPLACED

High inflation has captured the headlines as of late particularly as CPI recently hit the highest levels since 1981. Some are even suggesting we will face hyperinflation. However, while inflation is certainly present, the question to be answered is whether it will remain that way, or if the worst may already be behind us? END_OF_DOCUMENT_TOKEN_TO_BE_REPLACED

While wheat prices have garnered significant attention since the Russian invasion of Ukraine, corn has arguably been the agricultural commodity most affected by the war. In 2021, Ukraine was the third-largest corn exporter in the world, accounting for 11.4 percent of global exports. END_OF_DOCUMENT_TOKEN_TO_BE_REPLACED