The Fed is walking a fine line, and it’s easy to take this comment out of context. Inflation can be too low, and in order to ensure they adhere to their dual mandate of maximum employment consistent with stable prices, the Fed is willing to take a little risk with price stability. Nonetheless, if the marble hallways of the Federal Reserve building in Washington DC display carved quotes from Powell’s predecessors, this one is unlikely to be added. 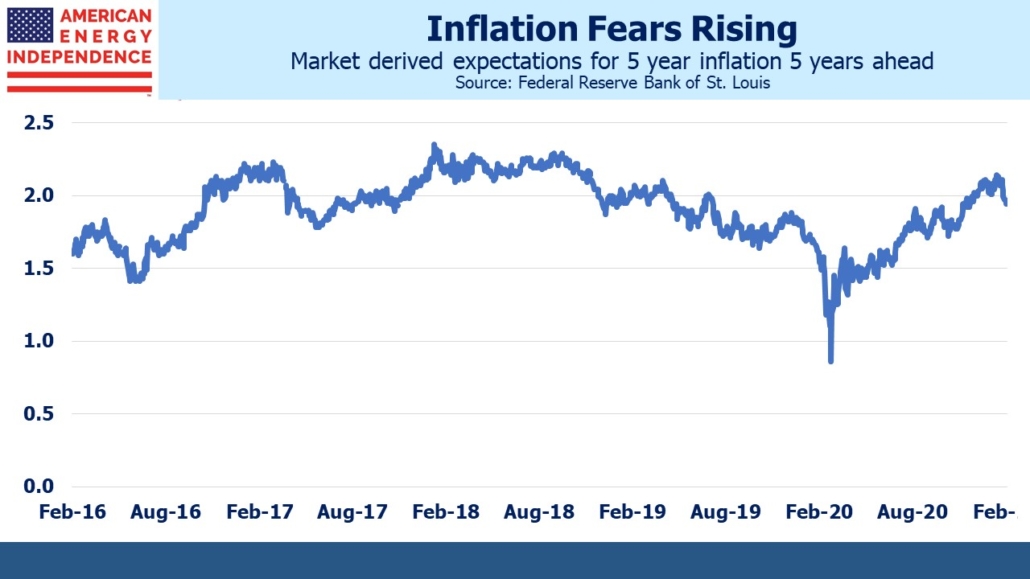 The Democrats have embraced Modern Monetary Theory (MMT) in all but name (see Democrats Will Test The Limits On Spending). The only theoretical limit on government spending is when it’s inflationary, and until it is one must conclude spending plans weren’t bold enough. Today’s low bond yields are a piggybank to be raided for Covid relief, infrastructure spending and the energy transition.

Fixed income investors have been abused by paltry yields for years. The biggest question in finance today is why long-term rates have remained so persistently low for so long. Real yields have been falling for at least a generation. Inflexible investment mandates for institutional investors such as pension funds, which mandate a fixed income allocation regardless of return prospects, are part of the reason.

Bond investors’ passive acceptance of diminished returns has made Democrat spending plans possible. $2.8TN in the Fed’s expansion of its balance sheet, $3.4TN in deficit-financed spending, plus the latest $1.9TN Covid relief plan add up to over $8TN in stimulus.  As Barry Knapp of Ironsides Macroeconomics notes, this is to offset the estimated $1.1TN nominal GDP output gap caused by the recession. In other words, we’re plugging the economy’s hole by a factor of over 7X. There’s little risk that the government’s financial response to Covid could be criticized as inadequate. 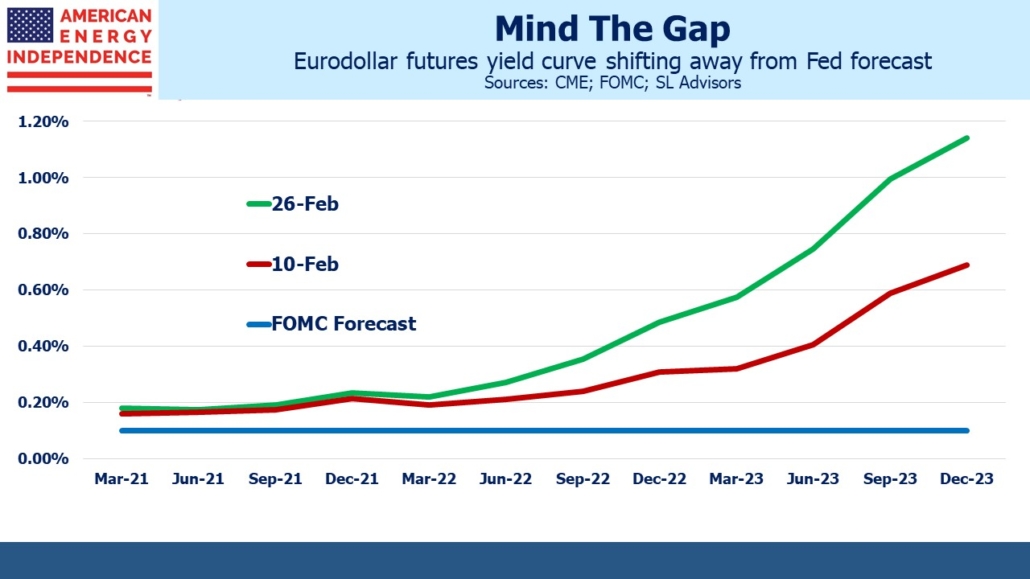 Against such a backdrop, even though Powell was simply repeating past comments on desiring higher inflation, it did betray a lack of sensitivity to bond investors still contemplating the 7X noted above. Under these circumstances, when the Fed wants inflation above 2% “for some time,” why would a return-oriented investor hold ten year U.S. treasuries yielding only 1.5%?

Inflation expectations have been drifting higher, recently breaching 2% for the first time in two years. Powell noted that, “… forecasters need to be humble and have a great deal to be humble about frankly.” Such humility must be abundant at the Fed, whose forecasts of short-term interest rates published in their projection materials were too high for most of the past decade (see Bond Market Looks Past Fed).

The bond market’s forecast of the “neutral”, or longer run Fed funds rate was consistently lower than in FOMC projections for years. The Fed steadily followed the market’s forecast lower. Predicting interest rates is hard. The Fed’s not very good at it. But their persistent failure to correctly forecast a rate that they set is amusing, for those who follow such things.

Now the situation is reversed; fixed income markets are beginning to price in higher short term rates by late next year, whereas the FOMC expects to keep rates low at least through 2023.

It’s unwise to bet against the Fed. But with $8TN of stimulus going up against the FOMC’s forecasting record, it’s likely that the Fed’s reputation will remain intact.

Inflation may not rise at all, in which case the bond market’s hissy fit will have been just that. However, Powell expects it to rise later this year before falling, which will be far more interesting.  The period of time during which inflation is above target may seem interminably long for investors positioned for it to be temporary. Bond yields will reflect how closely investors share the Fed chair’s breezy confidence. 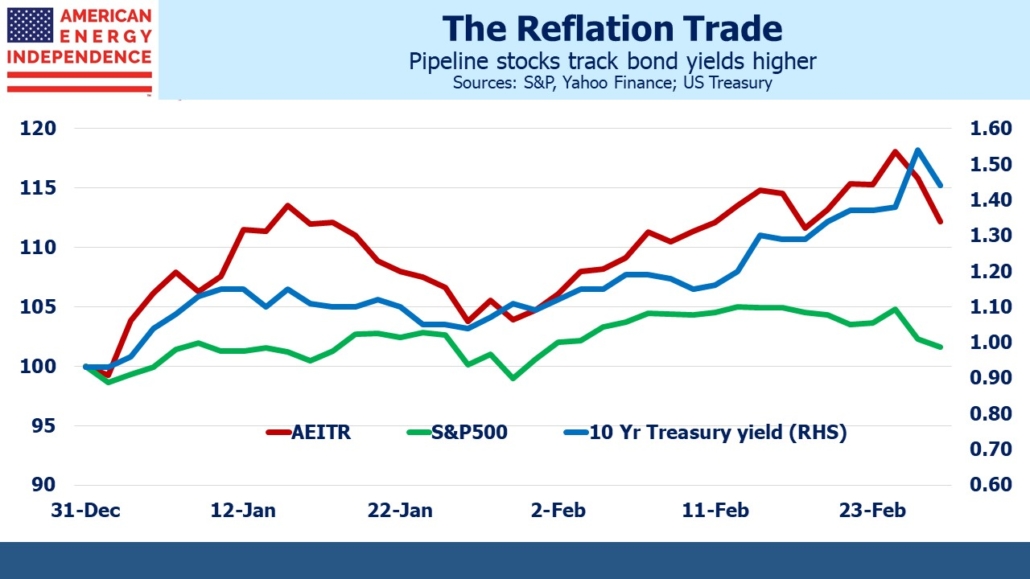 The eurodollar futures market reflected this change in expectations over the past week. Risks are more correctly priced in than before. However, there is no limit to the amount of stimulus that Washington will provide. If a Covid mutation creates a setback, the response will be predictable (see The Biden Put). Ten year treasury yields at 1.5% still don’t reflect that reality.

For example, pipelines have performed well so far this year. The sector is more insulated than many to bond market risk – if rates do move substantially higher, it will be because demand for most things including energy is booming. Investors are beginning to recognize this, since the sector (as defined by the American Energy Independence Index, AEITR) has become a reflation trade, tracking bond yields higher.

The post Bond Investors Are Right To Worry appeared first on SL-Advisors. Public policy is becoming more important to energy investors. Democrats now own the climate change issue. The desire of progressives to advance a world of solar panels and windmills is confronting pragmatists who’d like to keep the lights on. END_OF_DOCUMENT_TOKEN_TO_BE_REPLACED

Many observers dislike Goldman – their continued success and adept avoidance of mistakes made by others leads to grumbling of sharp practice. END_OF_DOCUMENT_TOKEN_TO_BE_REPLACED

Goldman almost always sidesteps trouble. That’s one of the conclusions from the Archegos blow-up that is estimated to have cost the firm’s lenders as much as $10BN. END_OF_DOCUMENT_TOKEN_TO_BE_REPLACED

In November, Engie, a French utility, pulled out of discussions with NextDecade Corp (NEXT) to import up to $7BN of Liquified Natural Gas (LNG). It was a big blow to NEXT, which is seeking partners to underwrite its construction of an LNG export facility in Brownsville, TX. Engie concluded that the natural gas sourced by NEXT would be tainted by its involvement in fracking, methane leaks and flaring. It wasn’t consistent with their energy transition goals. END_OF_DOCUMENT_TOKEN_TO_BE_REPLACED