We all know the US tax code is complicated. ALPS Advisors, manager of the Alerian MLP ETF (AMLP), has been tripped up by the tax complexities inherent in their fund structure. As a result they’ve been forced to make an embarrassing NAV adjustment to AMLP for taxes, depressing the fund’s NAV by almost 4%. It must be frustrating for recent buyers, since it shifted the fund to a 2.7% monthly loss, 3.9% behind its index.

AMLP is that rare ‘40 Act fund that pays corporate tax. Under the 1940 Investment Company Act, mutual funds and ETFs, which are corporations, can qualify to be RICs (Regulated Investment Companies) and therefore be exempt from corporate tax if they meet certain rules. These include being fully invested in securities, meeting certain diversification thresholds and so on. Almost all such funds qualify. Investing more than 25% of your assets in Master Limited Partnerships (MLPs) fails the test to be a RIC. 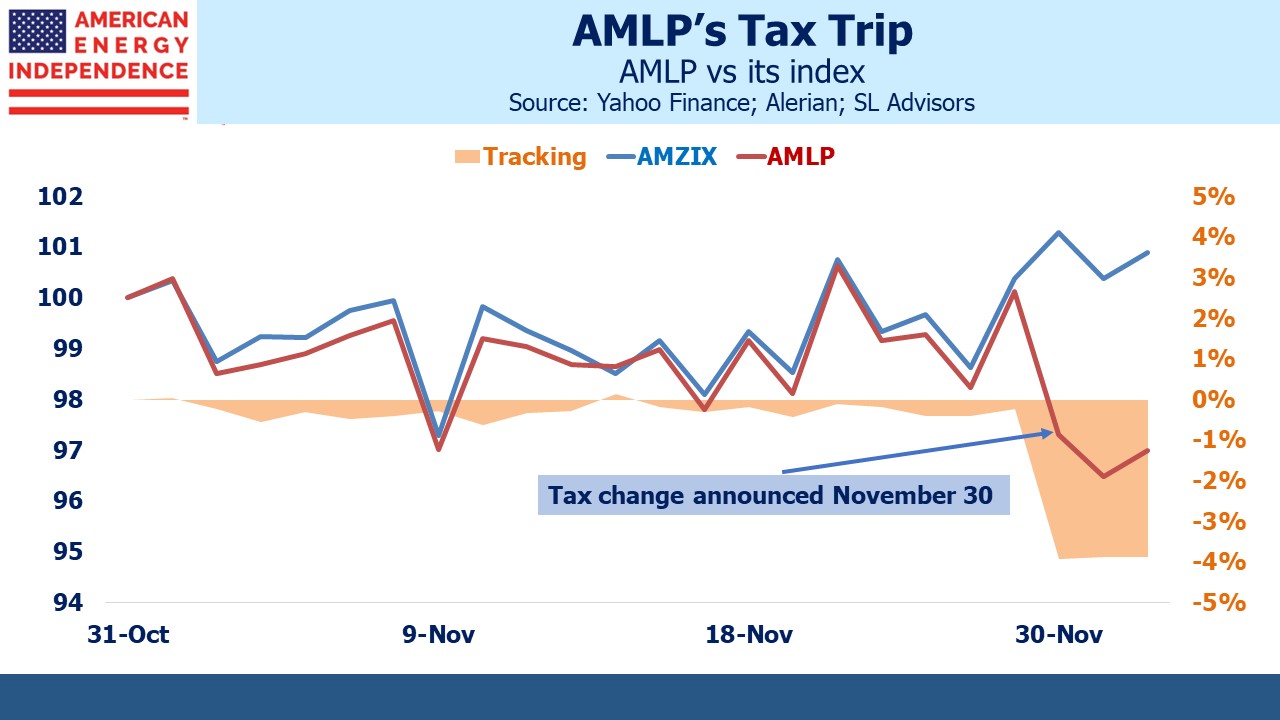 AMLP holds MLPs because in 2010 when it was launched, midstream energy infrastructure businesses were mostly MLPs, not corporations. AMLP provides a way for retail investors who don’t want K1s to invest in MLPs – but at the cost of lower returns because AMLP first pays corporate taxes on its realized returns before making distributions to its investors. We’ve written about this in the past (see  AMLP’s Tax Bondage and Uncle Sam Helps You Short AMLP).

An MLP-dedicated portfolio is out of touch with today’s sector, since many MLPs have converted to be corporations. The pool of money willing to invest directly in MLPs is limited to K1-tolerant US taxpayers – older, wealthy Americans. US equities are overwhelmingly held by institutions such as pension funds, endowments, foundations and sovereign wealth funds. These investors are mostly exempt from US taxes, so they avoid MLPs because it would create a tax liability for them. Only two of the ten biggest North American pipeline businesses are MLPs – the rest are corporations.

Several years ago the Federal Energy Regulatory Commission (FERC) announced a change in how their expenses were calculated that was adverse to natural gas pipeline MLPs. Taxes owed by their investors used to be included in the operating costs on which MLPs based their tariffs. FERC’s new rule would have lowered revenues, so natural gas pipelines soon converted to corporations to sidestep the issue.

It’s another example of the tax complexity that comes with MLPs. Although FERC later modified their stance, today’s MLPs tend to be (i) more liquids/less natural gas oriented, (ii) smaller, and (iii) more levered. The pipeline sector and MLPs are no longer synonymous.

AMLP has stuck with MLPs despite their shrinking relevance. If they considered diversifying into corporations this would put downward pressure on their current holdings, depressing their NAV and alarming investors. They’d need to obtain shareholder approval for this change of strategy and doing so would signal to the market an impending seller of MLPs. Many investors use AMLP to achieve pipeline exposure and, in our experience, few consider either the dwindling number of MLPs or the tax drag on returns. If AMLP was created today it would include pipeline corporations, in order to reflect the entire industry. It is an anachronism.

It now appears that AMLP investors must consider tax uncertainty on top of the haircut this imposes on returns. In their press release ALPS Advisors blames the NAV reduction on tax legislation passed in 2017, as well as the Coronavirus Aid, Relief, and Economic Security Act (“CARES Act”), which was passed in March 2020. The problem is not recent. 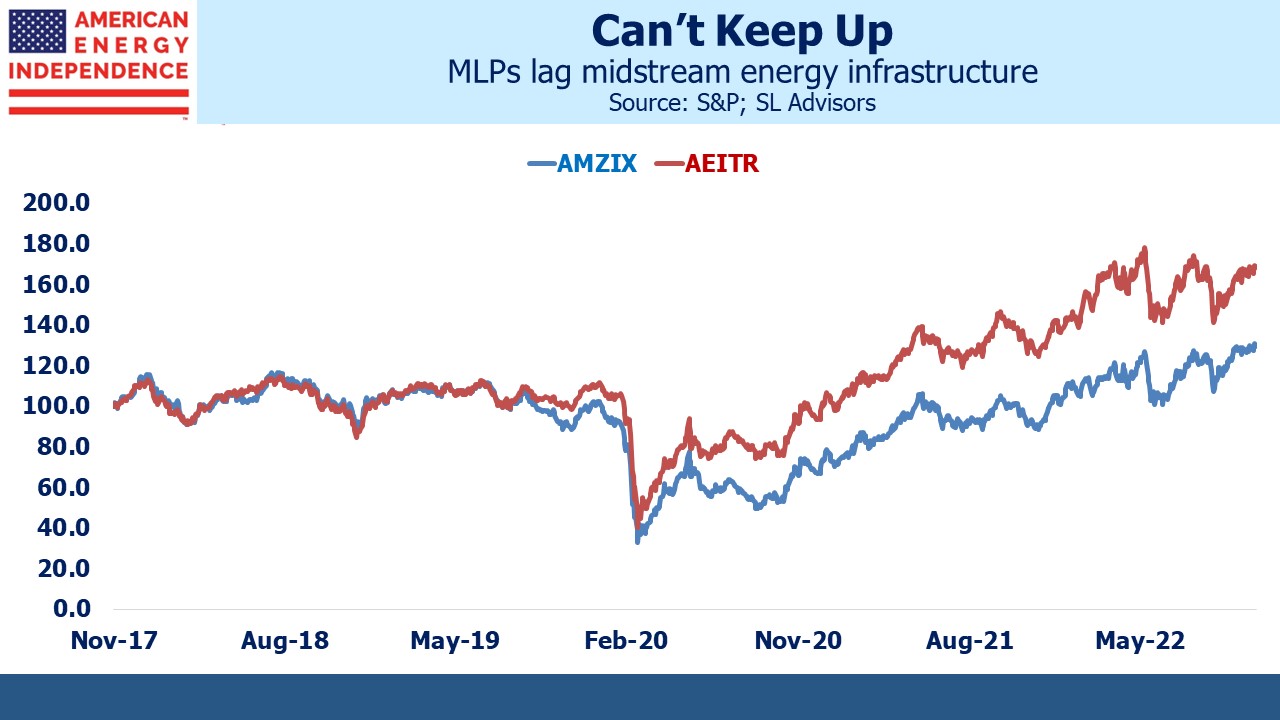 AMLP’s tax liability is updated daily, which suggests some certainty around its calculation. It looks as if ALPS had to modify their interpretation of the tax code, resulting in the sudden 3.9% NAV reduction. It must be complicated. Going forward, investors can no longer rely on the published tax liability. The press release warns that, “the daily estimate of the Fund’s deferred tax liability used to calculate the Fund’s NAV could vary significantly from the Fund’s actual tax liability.”

In other words, if ALPS gets their tax math wrong again, investors might face another big NAV adjustment. Because AMLP is a tax-paying entity and the tax code is fiendishly complicated, you can’t rely on the NAV being accurate.

Over the past five years, AMLP has significantly lagged the midstream energy infrastructure sector, because MLPs have lagged corporations and been more likely to cut their distributions. Investor inertia has presented little reason for any changes but lagging performance and now uncertain tax expense leave little here for the discerning investor. 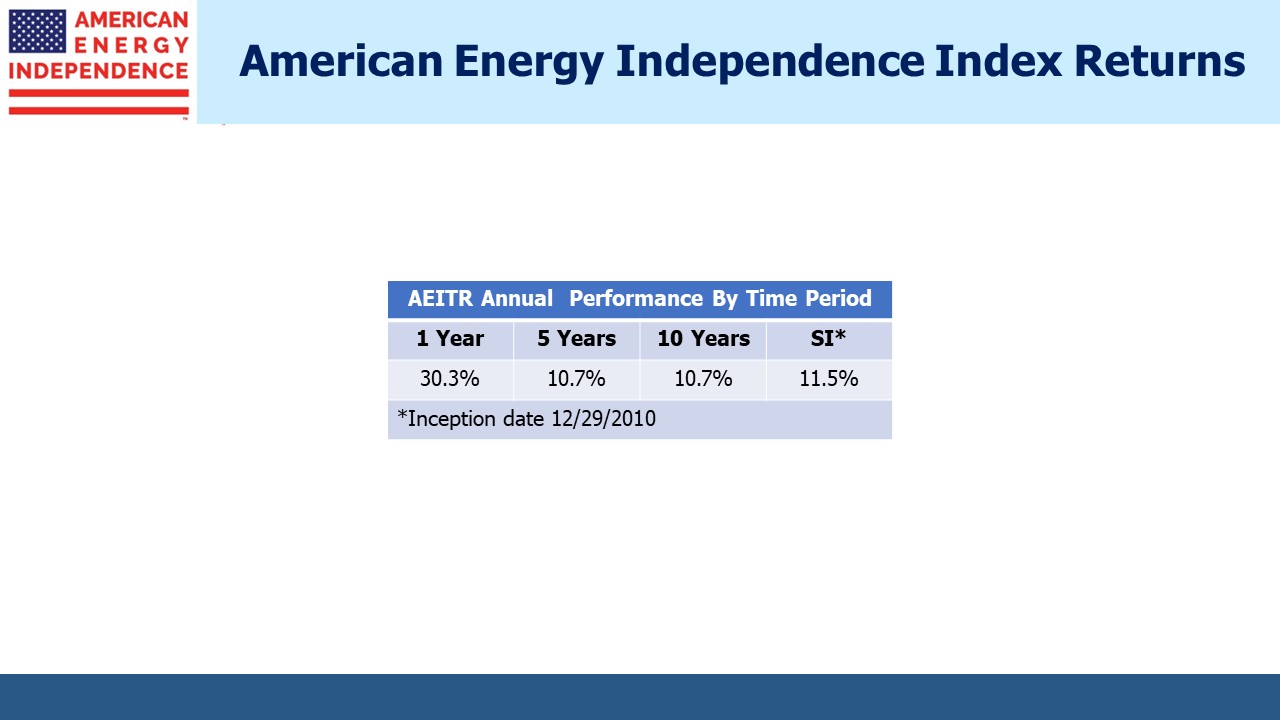 The post AMLP Trips Up On Tax Complexity appeared first on SL-Advisors. Kinder Morgan (KMI) reported earnings last week and announced that President Kim Dang will be taking over from Steve Kean as CEO. This prompted us to look back over KMI’s history, which reflects some of the best and worst of the MLP sector for the past ten years. END_OF_DOCUMENT_TOKEN_TO_BE_REPLACED

Fed chair Powell downplays the blue dots but often refers to them at his press conferences. Usually, the dots move towards the market as the Fed even has trouble forecasting their own policy rate. A recession later this year is the consensus forecast. It’s conventional wisdom that tighter policy will depress growth and induce a pivot. Fed funds futures imply easier policy by year’s end, although with less conviction than a month ago. The minutes released last week showed members expect, “a sustained period of below-trend real GDP growth would be needed.” END_OF_DOCUMENT_TOKEN_TO_BE_REPLACED

Readers know not to expect bearish views on energy from this blog. A year ago, we offered ten reasons why we thought the outlook was positive (see The Upside Case For Pipelines – Part 1 and Part 2). We were right about the direction but not all our reasons played out. Below is a report card: END_OF_DOCUMENT_TOKEN_TO_BE_REPLACED

For those who malign 2022 simply because of lousy investment returns, poor asset allocation is the cause. More energy exposure and no bonds would have made the year more agreeable. END_OF_DOCUMENT_TOKEN_TO_BE_REPLACED